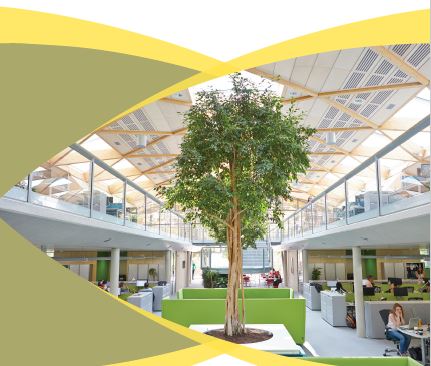 In an age of fast paced technological innovation, people are increasingly equipped with the ability to work from anywhere at any time. While it is sometimes argued that this leads to a blurring of work and home life, new research from the British Council for Offices (BCO) and Savills has shown that there is an increasing appetite for workers to be based in an office environment.

The third edition of the What Workers Want study has harnessed the opinions of over 1,100 British office workers in order to assess the needs of the individual worker and identify trends in the sector which will affect the future of workspace design in the UK.

While many workers seek flexibility in where and how they work, the research identifies that working from home has actually become less appealing; less than a third (28 per cent) of workers surveyed state they would like to work from home, a figure that has dropped from 45 per cent in 2013, when the research was last conducted.

Over three-quarters of respondents (77 per cent) said that they currently work in a traditional office, with the majority (60 per cent) choosing to work from a dedicated desk space compared to only four per cent that prefer to hot desk. This desire for a dedicated desk has actually increased over the past three years, rising from a figure of 41 per cent in 2013.

Although there is a demand from people to have a dedicated desk, the research shows that most workplaces (70 per cent) now also include a communal environment to work from, providing a space for more dynamic working. This is key to meeting workers’ needs with almost a third (29 per cent) deeming the ability to work from a variety of different locations in the office to be important, and almost half (48 per cent) considering access to collaboration space with colleagues as an imperative. Choice and control are key here, with workers wanting to be able to choose how and where they work, while also having a desk space to call their own. For a third of respondents (33 per cent), this would go as far as choosing to work from a standing desk sometimes if the facilities were available.

Despite there being clear elements of control that workers would like to have, 42 per cent of those surveyed deemed their office culture to discourage flexible working. However, the results outline why more thought needs to be given to what goes into creating an optimum working environment that can adapt to different working styles.

The research identified the most important factors perceived to be driving employees’ sense of wellbeing, and satisfaction with their workplace. It found:

Richard Kauntze, Chief Executive of the British Council for Offices, said: “What Workers Want is an important piece of research; a clear understanding of what office occupiers need and expect from their work environment is paramount to both the success of our industry and the wellbeing of the UK workforce.

“It is important to remember that in creating the optimum working environment, organisations shouldn’t try to adopt a one-size-fits-all approach. Rather, it requires a deep understanding of the people using the space, and the work being delivered. Getting this right can be complex, but has the potential to reap considerable rewards in terms of productivity and should therefore be at the heart of any business’s strategy.”

Steve Lang, Director, Savills Research and author of the report, added: “For employers, ensuring that the office is a space in which workers feel comfortable and cared-for isn’t just the right thing to do – it also makes business sense, helping to both attract new staff and retain the best talent. While our concept of what a ‘good’ office is supposed to look like may be shaped by photographs of innovative fit-outs at high profile companies, it’s important not to forget the basics.

“Comfort, temperature and lighting are consistently the most important considerations for employees; the focus should be on getting the fundamentals right rather than trying to reinvent the wheel.”