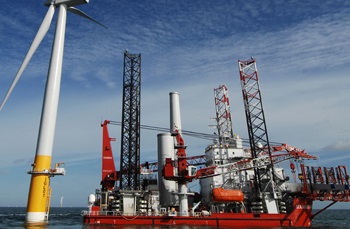 Two global operators have been found guilty after a worker was killed and another seriously injured during construction of an offshore wind farm.

The incident happened when a team of engineers were loading wind turbine blades on to a sea barge for delivery to Greater Gabbard, off the Suffolk coast, on 21 May 2010.

During the loading of wind turbine components at Pakeston Quay, Harwich, a 2.11 tonne part of the blade transport arrangement fell off, crushing and fatally injuring one worker and seriously injuring another.

Chelmsford Crown Court heard both workers were employed by Siemens Windpower A/S (SWP) but were working for Fluor, the principal contractor.

The injured man, Frank Kroeger, was airlifted to Addenbrookes hospital in Cambridge where he was resuscitated twice. He suffered a ruptured spleen, lacerations to his liver, a collapsed lung collapsing, multiple rib fractures on his left side and significant crush injuries to his right arm and hand with nerve damage to his thumb and fingers. His injuries were life-changing and required almost three weeks in hospital in the UK, followed by a long period of rehabilitation and treatment near his home in Germany. The family of the fatally injured man asked that his name to be withheld.

The investigation carried out by HSE found serious safety failings in the two firms’ management systems for the loading operation which allowed vital parts of equipment to go unchecked before being lifted.

Siemens Windpower A/S (SWP) was charged with the same offence and also a Section 2 (1) breach of the same act but pleaded guilty at an earlier stage. It was also sentenced and ordered to pay £375,000 in fines with costs of £105,355.

“This incident could easily have been avoided had suitable systems and procedures been in place to ensure that all loads were properly connected whilst being lifted,” stated Speaking after the hearing, Julie Rayner, Inspector, HSE. “Had the right questions been asked when the lift was being planned and had the bolt and two brackets holding the blade and frame together been checked before they were lifted, the death and serious injury of two workers could have been prevented.”

Picture: Greater Gabbard wind farm was the destination of wind turbine components but there was a tragedy during the loading at Pakeston Quay, Harwich, crushing and fatally injuring one worker and seriously injuring another