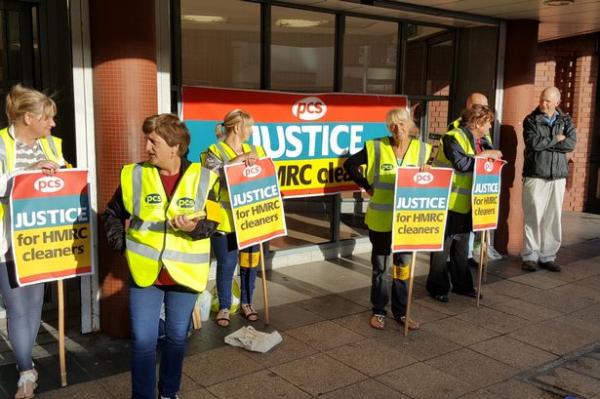 Monday and Tuesday 25 & 26 saw a two-day cleaners' strike by Public and Commercial Services Union members working for ISS at HMRC buildings in Bootle and Liverpool. The action is said to be in response to ISS cutting back hours in order to claw back costs associated with the imposition of the Government's 'living wage'.

The union claims the first day of action saw every single PCS member working for ISS at the affected HMRC sites take part in the action. Non-members in Liverpool did not get involved.

Recent PCS pay claims presented to HMRC have called on the department to ensure that its contractors pay their staff the real living wage, defined by the Living Wage Foundation as £8.25 an hour outside London. However, ISS has now cut the hours of the cleaners, claiming that they cannot afford to meet the introduction of the Government’s much lower 'national living wage' (£7.20 an hour for over 25s).

Peter Dowd MP, Labour’s Shadow Treasury Minister, told ThisWeekinFM: “This action is a major embarrassment for a Tory Government that talks a lot about rolling out the National Living Wage while not even ensuring their own staff earn enough to live on. HMRC is responsible for ensuring that private sector employers are paying the right rate, so it’s ironic that the Tories won’t even give them enough resources to pay their own cleaners properly.

"Philip Hammond should meet with ISS and PCS in order to ensure that increases in the minimum wage are not paid for out of the pockets of their own staff, including contractors.”

A PCS spokesperson said: "A ballot of the 30 cleaners from six offices in Bootle and Liverpool 100% voted for strikes on a 66% turnout. The 2-day strike will be followed by an overtime ban and work to rule and the members of PCS Revenue and Customs Group's Bootle Taxes and Liverpool City branches have not ruled out escalating strike action, if ISS continues to refuse to reconsider its position."

ISS puts hands to the pumps

On Monday ISS deployed managers and workers bussed in from Manchester, to clean the offices.

In a dig at ISS, the PCS spokesperson said the group outnumbered the regular cleaners in most of the buildings showing how much work staff have upon them as a result of several rounds of cuts.

PCS HMRC group secretary Martin Kelsey said: "Despite ISS' net profit doubling to nearly £250million in 2015 they are holding back from the lowest paid workers in their organisation even the most meagre benefits arising from the Government’s new minimum rates of pay. HMRC should not be in business – directly or indirectly – with companies hell-bent on making members already living on poverty wages, into victims of their corporate greed."

'We take our responsibilities to our employees very seriously and we strive to ensure that all our people are paid a full and fair living wage, whilst maintaining the results required by our clients.

'With regard to the Living Wage - as calculated by the Living Wage Foundation -  a number of our clients have adopted this or are working towards it. Whilst ISS continues to promote the concept of the Living Wage at every opportunity, this Living Wage is however voluntary and is paid at client contracts where the client has elected to do so.

'Where the cleaning service is concerned, contrary to claims by the PCS trade union, the amended cleaning service allows us to deliver an end result which meets the clients’ contracted specifications. At the same time, our teams strive to ensure that conditions, workloads and ways of working are fair, safe and consistent across the client’s sites where our people are employed.

'We are very disappointed that following several rounds of discussion, our cleaning staff at HMRC decided upon this course of action. We remain, as always, committed to seeking resolution to the various concerns raised by all of the relevant suppliers and stakeholders involved in this contract.'

Picture: The sight of its cleaners on strike and on the picket line outside HMRC offices over cuts to hours to help fund the imposition of the 'Living Wage' will embarrass ISS which is a great supporter of the Real Living Wage