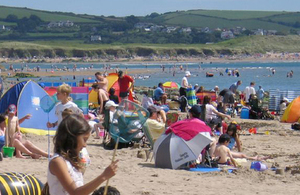 Warnings have been issued by Public Health England (PHE) following forecasts of hot weather for the coming days and nights.

PHE issued the warnings on Monday 12, the same day the Met Office said hot and humid weather would arrive in the East of England, the South East, London and the East Midlands, which were all put on heatwave Level 2 status.

Dr Thomas Waite, of the Extreme Events team at PHE, said with regards to Monday's warning: "Because the heat is going to arrive very soon, we are urging employers and individuals to think about what can be done for those around you."

PHE added: 'much of the advice on beating the heat is common sense and for most people there’s nothing to really worry about. But for some people such as those with underlying health conditions, summer heat can bring real health risks'.

The Met Office declared a Level 2 heat-health alert on Monday morning. That means that was a high chance that temperatures would hit certain temperature thresholds for at least 2 days and the intervening night. Paul Gunderson, Chief Meteorologist at the Met Office, said: "It is going to be a very warm few days across parts of the UK. Temperatures are expected to reach around 28oC in the south east and London could see temperatures over 30oC. Night time temperatures are also looking warm with the south east dropping to just the high teens overnight."

Gunderson continued: "The heat is expected to be more widespread both during the day and overnight on Wednesday, although peak temperatures probably not quite as high as on Tuesday."

The day after tomorrow

One of the Earth's most regular climate cycles has been disrupted scientists declared at the end of last week as they discovered unprecedented atmospheric behaviour has played havoc with one of World's most repeatable atmospheric patterns.

The normal flow of air high up in the atmosphere over the equator, known as the Quasi-Biennial Oscillation, was seen to break down earlier this year. These winds in the stratosphere are found high above the tropics, their direction and strength changes in a regular two-to three-year cycle which provides forecasters with an indication of what weather to expect in Northern Europe. Westerly winds are known to increase the chance of warm and wet conditions, while easterlies bring drier and colder weather.

Scientists from the National Centre for Atmospheric Science (NCAS) at the University of Oxford and the Met Office were part of an international team that observed the unusual behaviour in February, noticing a reversal of the expected pattern in the winds.

The Quasi-Biennial Oscillation is a regular feature of the climate system. On average, these equatorial eastward and westward winds alternate every 28 to 29 months, making them very predictable in the long term. The team's findings published in Science this week, show that this unexpected change in wind direction was caused by atmospheric waves in the Northern Hemisphere.

Dr Scott Osprey, an NCAS scientist at the University of Oxford, said: "The recent disruption in the quasi-biennial oscillation was not predicted, not even one month ahead. If we can get to the bottom of why the normal pattern was affected in this way, we could develop more confidence in our future seasonal forecasts."

Prof Adam Scaife, Head of Long-range Forecasting at the Met Office and Honorary Visiting Professor at the University of Exeter, said: "This unexpected disruption to the climate system switches the cycling of the quasi-biennial oscillation forever. And this is important as it is one of the factors that will influence the coming winter."

A return to more typical behaviour within the next year is forecast, though scientists believe that the quasi-biennial oscillation could become more susceptible to similar disruptions as the climate warms.

Later this month international research groups will meet in Oxford to discuss the origins and implications of this event.

Victoria Lopez predicted the hot spell for the south of England this week - she will return with a regular weather report from this Thursday.

Picture: It'll be OK on the beaches - but office, factory and city workers may find it a bit hot, hot, hot

How Do Facilities Management Teams Cope in Heatwaves?

Risk of heat-related illness among staff, keeping older buildings cool and security concerns from open doors and windows – these are just some of the additional...