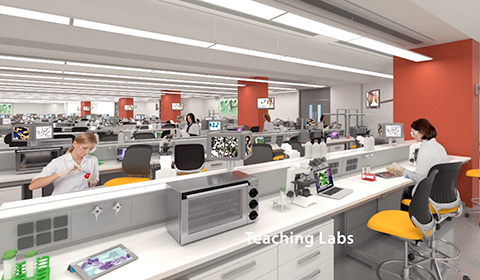 The Life Sciences building is the University of Bristol’s biggest construction project to date and will be the focal point for world-leading research, needed to tackle the key challenges of the 21st century such as food security and environmental conservation. The building has just welcomed its first intake of students - hence the timing of Sir Richard's visit.

Professor Sir Eric Thomas, Vice-Chancellor of the University of Bristol, said: “We’re delighted that Sir David will help us mark this significant milestone in the University’s history.

“Many of the most significant advances will come from the Life Sciences and  it is fitting that Sir David joins us for the launch of this magnificent building, which will put Bristol on the map for world-renowned research and teaching in this area for years to come."

Work to construct the 13,500 square metre building, which is sited on the corner of Tyndall Avenue and St Michael’s Hill, began in July 2011.

A total of 2,000 people have worked on the project, including 28 architects from 10 countries.

The building, designed by the architects Sheppard Robson and built by Vinci Construction UK, forms a new landmark on the Bristol skyline.

To reflect the research being carried out inside, the exterior of the building is home to a striking vertical garden, called a living wall, which stands over 20 metres above street level. It’s home to 11 different species of plant, plus boxes for birds and bats, and creates the pattern of a microscope image of algal cells.

A state-of-the-art greenhouse, known as a GroDome, sits on top of the building and is capable of recreating tropical conditions thanks to controlled light, humidity and temperature.

The building comes with a terrace with views across the city.

The Life Sciences building also has one of the largest teaching labs in the country, capable of teaching 200 students at once. There are multiple screens to ensure all students can see close-up what the lecturer is doing and moveable walls can change the size of the teaching space.

Research within the Life Sciences building will not only focus on plant sciences and animal behaviour but it’s also home to some of the country’s leading paleobiologists who are using the latest technology to learn more about dinosaurs and evolution.

Biologists will join forces with chemists, computer scientists, engineers, mathematicians and earth scientists to establish how lessons learned from nature can benefit society.

The wait is over

Professor Gary Foster, who has been leading the project on behalf of the School of Biological Sciences, said: “We have waited a very long time for this building but it has been well worth the wait. The building is stunning inside and out, and finished to a very high standard.

“This investment in Life Sciences is a major move by the University of Bristol in this field, showing strength and ambition, with Bristol being an exciting and ideal place to carry out research over the coming years.

"The new building also provides outstanding laboratories for science teaching and will enhance the undergraduate experience by facilitating research-led study and staff-student interaction, making Bristol University the first choice for research and teaching in this area."

The flagship project and iconic building showcases the best in sustainable design and energy efficiency. Heat from the laboratories’ ventilation systems is reclaimed and re-used, rainwater collected from the roof is used to flush the toilets, blinds lower automatically when the sun shines and lighting has been designed to avoid pollution of the night sky.

The space around the building has also been redesigned. A new flight of steps from St Michael’s Hill to the Royal Fort has just been opened and landscaping will link the new Life Sciences building to the rest of the Royal Fort garden.

One of the Wow! Gorillas – named ‘Going Going Gone’ – which was part of the trail set up to celebrate Bristol Zoo's 175th anniversary in 2011, will also live inside the Life Sciences building.

Patrick Finch, Bursar at the University of Bristol, said: “This building and its surrounding public realm has represented the most ambitious project taken on by the University's Estates Office to-date.

“That it has now been successfully handed over to form a wonderful new home for staff and students is a testimony to a strong ethos of team working between staff in Estates and in the School of Biological Sciences, consultants and contractors. I am immensely proud of the team's achievement, which should set a standard in the sector for many years to come.”

Two Grade II listed features of the site were retained – the frontage of the former Children's Hospital and the Ivy Gate which leads to Royal Fort House and gardens, a nationally significant archaeological site having been developed as a bastioned fort during the English Civil War.