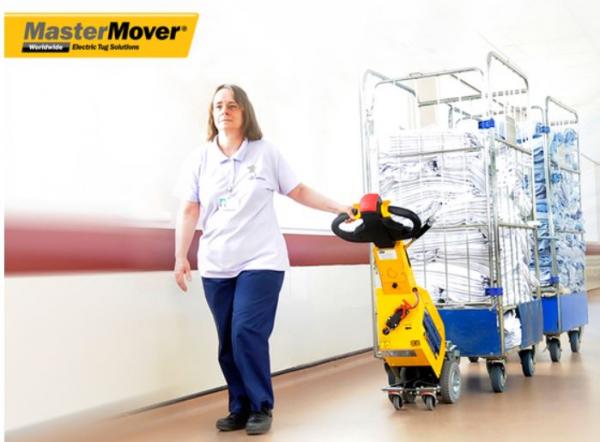 The equipment is manufactured and supplied by electric tug specialist MasterMover and will be used to transport logistics cages in the loading and store areas.

The tugs, which are part of MasterMover’s SmartMover range, allow a single member of staff to move loads of up to 1,200kg. This is achieved through a combination of a hydraulic coupling point, which creates an unbreakable connection to the load, and a leveraged weight-transfer system complemented by two drive motors.

MasterMover’s electric tugs are designed to minimise the need for manual handling, which improves the efficiency of handling processes while also reducing the risk of injury.

Andy Owen managing director of MasterMover said: “By improving efficiency, healthcare facility managers can minimise the costs associated with handling tasks. This goes beyond the litigation costs saved by reducing the number of injuries, as it frees up more staff time to complete more valuable tasks.”

Picture: An NHS trust's investment in handling equipment has improved efficiency and safety

The new NHS Deep Cleaning and Advisory Service is enforcing a new national standard for domestic cleaning. Sue Ryder is amongst the first healthcare providers in...

FM company Mitie has been named as a supplier on the Crown Commercial Service (CCS) agreement for Building Cleaning Services. The CCS agreement allows public sector...

The NHS is trialling a new technology solution which claims to replicate the science of outdoor air in indoor spaces. Airora Professional, developed by PA Consulting...