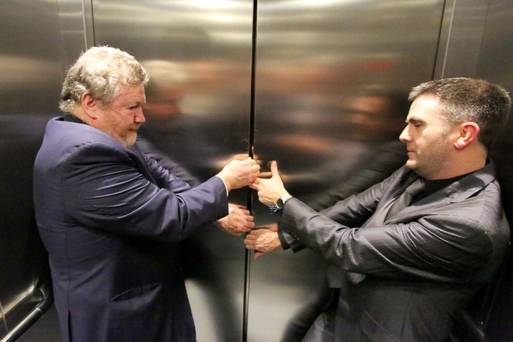 FIRST PUBLISHED IN NEWS ON 8 SEPTEMBER - London Firefighters attend 13 non urgent lift call outs every single day - day in day out. That's nearly 5,000 incidents a year in the capital alone. And this only counts the calls when a person is shut in a lift but not in any immediate physical or medical danger.

London Fire Brigade Third Officer, Dave Brown said: “If there is a genuine emergency we will be there but on many occasions if you are shut in a lift it’s an inconvenience not an emergency situation. It’s the responsibility of building owners to maintain their lifts and ensure they use a lift engineer call out service if the lift breaks down.”

“The Brigade is always willing to work with building owners to advise on lift safety. Preventing people getting shut in lifts is in everyone’s interest and we’re calling on all building operators to ensure their lifts are regularly maintained and that their staff are properly trained to release people who get shut in them.”

The Brigade started making a charge for non-emergency call-outs in 2009 - which don't even cover costs.  While lift releases have decreased since the charges were introduced, the amount of call outs is still very high and disgracefully, there are building owners who have yet to pay their ‘shut in lifts’ bill. City-wide the Brigade is owed nearly £250,000 in unpaid charges.

Under existing rules the Brigade can recover £290 plus VAT from owners of buildings and lifts for attending  non-emergency lift call outs. The charge is applied from the third occasion firefighters are called to the same building. The cost recovery scheme was implemented to incentivise building owners to tackle the problem - but it is clearly proving ineffective.

Third Officer, Dave Brown said: "Some lift owners in London have taken significant steps to improve the maintenance of their lifts and to provide effective engineer call outvarrangements. Where outstanding improvements have been made, we’ve introduced exemptions from the charging process."