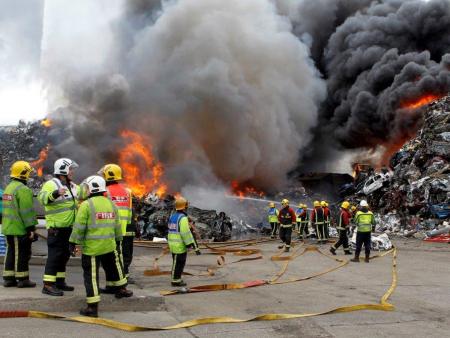 Firefighting continued through the night of Wednesday March 30 at the scene of the Saltley fire, with around 70 firefighters having to stay on site.

Seven fire engines, five Brigade Response Vehicles, three hydraulic/aerial platforms, high volume water pumping equipment and a mobile Incident Command Unit were all tied up as the blaze which had raged earlier in the day was slowly brought under control.

Staff from the waste company affected worked with the Fire Brigade through the night, using their own heavy plant and lifting gear, to help break up the scrap materials.

As well as the fire-fighting operation, one of the main priorities on Thursday morning was to help local businesses and their staff return to their premises and liaising with Western Power, the Canal & River Trust, the Environment Agency, Public Health England, Birmingham City Council, police and the ambulance service.

Picture: A major fire this week tied up huge Fire Brigade resources and caused disruption to local homes and businesses, power lines and the road network