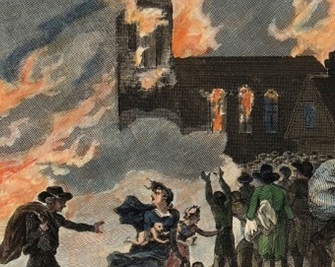 Repairing the damage caused by a fire the size of the Great Fire of London today would cost insurers at least £37 billion. The calculation has been published as we approach the 350th commemoration on September 2.

To mark the 350 years since an incident on Pudding Lane parked the conflagration, the Association of British Insurers (ABI) has produced a timeline showing how this event led to the creation of the property insurance market we know today.

The fire devastated over 13,500 homes and 87 churches, including St Paul’s. As property insurance policies didn’t exist at this time, homeowners had no guarantee that they would be able to rebuild their properties or replace their belongings. This led to many people, including the famous Samuel Pepys, running to their gardens to bury valuables such as cheese and wine.

Estimated rebuild costs were £10 million in the 17th century. The ABI calculates this would cost £36 billion today, although the actual figure could be much higher due to the costs of business interruption.

At the time, re-building St Paul’s cost £700,000; this would cost around £600 million today. (Source: Ecclesiastical Insurance)

James Dalton, Director of General Insurance Policy at the ABI, said: "The Great Fire of London led to the modern insurance industry we know today. The damage of the fire was on an unprecedented scale and it is difficult to imagine now that no insurance policies were in place for any of the damage caused. As unlikely as it is, if such a fire was to take hold today the cost would be enormous."

In an age when bloodletting and the use of leaches was ever-popular, Nicholas Barbon launched the first fire insurance scheme in 1681. The scheme entered into around 10,000 policies, until it was dissolved around the year 1710.

The Great Fire of London led to the creation of the London Fire Engine Establishment (LFEE), an organisation run by several insurance companies.

Lobbying from insurance companies and LFEE led to the creation of the Metropolitan Fire Brigade in 1866.

Picture: The Great Fire of London gave birth to the property insurance industry who would have to pay out £37 billion if such a fire struck again 350 years later

The report from the Nottinghamshire Fire and Rescue Service, did not find that the main contractor, Morgan Sindall, or its sub contractors had acted outside any relevant...

Fire Door Safety Week, which runs from 16-21 September 2013, is all about raising awareness of this critical element of fire safety in every commercial, public and...