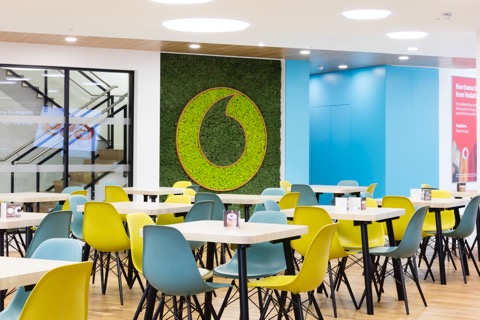 A major refurbishment of Vodafone's Bracknell offices has been completed by Area Sq and MESH Construction Consultancy.

The redevelopment of the ground and first floor of Waterside House in Bracknell is part of the latest in a series of projects that support Vodafone's Better Ways of Working initiative which aims to pioneer a flexible working regime.

The works took place over the course of a year in a phased occupied manner. This required working closely with Vodafone's facilities and ambassadors teams as well as project manager Aecom to come up with a phased programme that did not interrupt day-to-day operations at Waterside House, working with the moves team to clear each area out, strip back to shell and refurbish. Major building works included installing a link bridge, new reception area and external landscaping works.

The building has been brought up to date with the installation of all new data cabling, communications rooms, new ceilings, lighting schemes, air conditioning and floor finishes. These changes were reportedly all carried out without disrupting the complicated data infrastructure within the building with fire alarms, security systems and power to the rest of the building, all kept running while the works were being completed.

The redesigned offices at Waterside House are part of a current programme carried out by Area Sq and MESH for Vodafone offices around the country, including Thames House and Brook House in Bracknell and Smale House, London, all of which support Vodafone's Better Ways of Working initiative.

Away with hierarchical barriers

The mobile phone provider believes that by breaking down hierarchal barriers and removing fixed desks and personal offices, the programme ‘fundamentally challenges’ how people interact and collaborate by ensuring that no one has their own office but that all staff, including the leadership team and CEO, can take their laptops to work in any one of a number of workspaces.

To support this approach, the new open plan workspaces at Waterside House encourage communication, collaboration and planned serendipity, and comprise a range of collaboration zones, breakout spaces and ‘wellbeing’ areas, including a modern gym and a roof terrace which was installed to be used as both a working area and a communal space.

Picture: Vodaphone’s Bracknell offices has had a radical overhaul to encourage flexible working and an end to hierarchical barriers