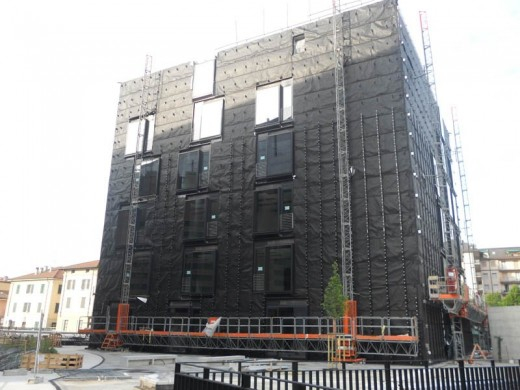 The University of Insubria’s science department building has been fitted with a ventilated facade system that features a UV-protected facade membrane.

Located in Como, Italy, the new chemical-environmental laboratories have been built for the University of Insubria’s Department of Science and High Technology.

A 3,000sqm building has been constructed to accommodate the 25-30 scientific research laboratories. The cube-shaped structure has been fitted with a DuPont Tyvek UV ventilated facade system, created by Airaudo Costruzioni. The system has been designed with a 250mm thick masonry support layer and an insulating layer. A layer of DuPont Tyvek UV Facade has been installed in the middle of the system. There is then a 170mm-200mm ventilation gap and an aluminium load bearing structure.

The exterior cladding comes in the form of Cortene A steel sheets, which have been specified to give the building a smooth finish.