Navy Plots a Safe Course to Save Parliament from Thames Bomb 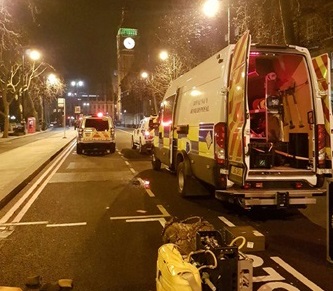 London's Victoria Embankment was closed on the evening of January 19 as the Royal Navy was called in to assist the Metropolitan Police deal with an unexploded WW2 bomb near the Houses of Parliament in the River Thames.

Police were called at about 5:15pm just as office workers were making for the busses, the underground and the stations that run trains to south London and southerly destinations.

Temporary road and bridge closures were rapidly put in place - bringing much unwanted disruption to the rush hour in one of the busiest parts of the city. Westminster and both Waterloo Bridges (road and rail) were affect

Specialist officers attended and assessed the device and at about 7:15pm decided the Royal Navy would be needed.

The Royal Navy bomb disposal experts had been rapidly deployed from the Portsmouth based Southern Diving Unit 2. The bomb had been found by a dredger operating in the Thames. It was eventually towed along the Thames and out towards Tilbury, where it was safely detonated at around 6:00am on Friday 20 morning.

“It was a long night for me and the team but this is exactly what we are trained for so it was a successful operation, although it was a little surreal carrying out our job right next to the Houses of Parliament,” said Lieutenant Mike St Pierre, the officer who led the bomb disposal team on scene.

“The bomb itself was in good condition considering how old it was and it clearly still presented a danger.

"We removed it from the barge and towed it along the Thames, working very closely with the Met Police to safely close off bridges as we went, until we were sure we could detonate it safely.”

"Royal Navy divers are on standby at 10 minutes notice around the UK to deal with these things, so last night was very much business as usual for my team. They did an excellent job, responding quickly to the incident and ensuring smooth running of the operation to make sure the public were kept safe throughout," Commander Del McKnight, Commanding Officer of the Royal Navy’s Fleet Diving Squadron, told ThisWeekinFM.

The device was identified as a German SD 50kg bomb, a small armour-piercing bomb dropped from an aircraft.

Commander McKnight continued: "The operation to make the device safe required the closure of Waterloo and Westminster Bridges for several hours. Westminster Underground Station was also closed temporarily and river traffic was halted.

“This sort of ordnance, while old, does still present a serious threat which is why the Royal Navy is always ready to respond and dispose of them.”

The Royal Navy’s Southern Diving Group has two teams, one based in Plymouth and one in Portsmouth. The teams are made up of elite divers, who are experts in explosive ordnance disposal and also serve at high readiness to deploy across the globe in support of Royal Navy operations.

Picture: Parliament and its surrounds were cordoned-off as a WW2 German bomb was dredged up from the Thames