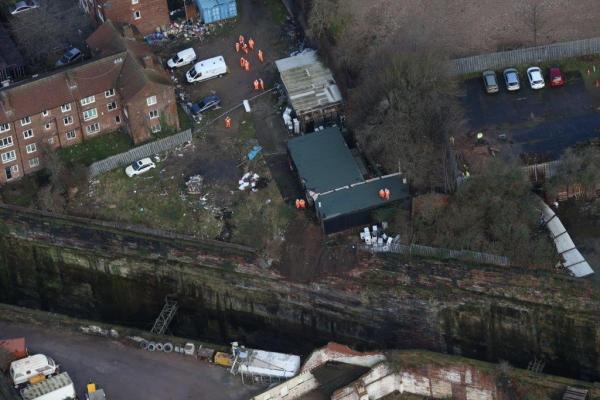 Aerial footage released yesterday (March 2) shows the extent of the damage to the wall on the approach to Liverpool Lime Street station.

The wall between Edge Hill and Lime Street collapsed at around 5.45pm on Tuesday afternoon (February 28) dropping nearly 200 tonnes of rubble onto the line below, causing extensive damage to the overhead power cables.

RMT reports suggest that at least two trains had very near misses.

A Network Rail helicopter, which is used to monitor and maintain the railway across Britain, was used this week to capture the footage as part of the repair plan.

A spokesperson for Network Rail said: “The orange army is working round-the-clock to get train services back up and running. The work to repair this damage is set to take several days and this footage shows the extent of the damage and the challenge we face.

“Our activities are in three steps: firstly, making the location safe, which we’re doing now. This will allow us to start step two, safely accessing the tracks below to clear the debris, before step three, repairing the damaged railway.

“We removed 60 tonnes of soil and five large containers, each holding many tonnes of material, from the top of the cutting to prevent further slips. A 10 inch-thick concrete slab has been removed so we can start stabilising the retaining wall in the 10 metre-high cutting."

At around 9:30pm on February 6, an incident occurred at Bank station on the Docklands Light Railway (DLR). A passenger became trapped by their coat, in the closing doors of a train preparing to depart. The passenger managed to quickly get out of the coat, which remained trapped. A short time later, the coat was dragged into the tunnel by the train. The passenger, who was not dragged, was not physically injured but the incident caused considerable distress.

The coat was subsequently recovered by DLR staff.

An independent investigation has been set to identify the sequence of events that led to the incident. It will also consider: how the train was dispatched, the design and operation of doors, processes used by DLR to manage dispatch of trains from stations, the adequacy of the train and platform equipment used for train dispatch and any relevant underlying management factors.