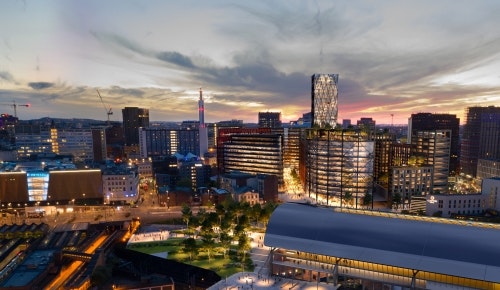 The Bishopsgate Goodsyard may now progress to become a 10 acre mixed use scheme in the heart of Shoreditch, east London now Hammerson and Ballymore have submitted revised plans to the Greater London Authority.

The plans, which were submitted as an amendment to the existing planning application for the site, follow an extensive public consultation and discussions between the Hammerson and Ballymore joint venture, the Greater London Authority (GLA), Hackney Council, Tower Hamlets Council and other local stakeholders.

Bishopsgate Goodsyard is part of Hammerson’s City Quarters concept which was announced in 2018.

The revised plans provide for 500 homes, of which 50% will be 'affordable'. This is an increase on the 15% 'affordable' previously proposed under the existing application, which was submitted in 2014.

The scheme will also provide 1.4 million sq.ft of workspace in five buildings, including around 140,000 sq.ft of 'affordable' space - one of the largest single contributions of any development in London.

The development will also provide a public park sitting on top of the restored railway arches that will include a series of connected gardens, terraces and walkways, with a wide variety of biodiversity, including trees and planting.

In total, the site will have over 6 acres of public realm, 25% larger than originally proposed and covering over 50% of the whole site.

Following the acquisition of the site from Railtrack in 2002 and the completion of the London Overground and the opening of Shoreditch High Street Station in 2010, the joint venture has been working to transform the site which has been derelict since a fire in the 1960s.

Elsewhere in the week ending August 2, Hammerson, which owns and manages Bullring & Grand Central, has submitted a planning application to Birmingham City Council for the regeneration of its Martineau Galleries site. This is Hammerson’s first major application as a part of its City Quarters concept.

Announced by Hammerson in July 2018, City Quarters looks to create mixed use neighbourhoods surrounding its existing destinations, in the UK and Ireland. The concept will see Hammerson transform many of its city venues beyond pure retail into neighbourhoods providing homes, workspace and accessible public areas.

The submitted plans look to regenerate the 7.5 acre Martineau Galleries site which includes the Square Shopping Centre, Dale End car park and 1-7 Dale End. Proposals include the delivery of new homes [for rent and purchase] and up to 1.4m sq.ft of workspace, as well as a new city centre hotel, restaurants and cafes.

Picture: Hammerson has submitted plans for the City Quarters scheme in Birmingham.

Are You Moving Enough at Work?

The Compensation Experts have teamed up with physiotherapist and creator of moovlite, Jeannie Di Bon, to list the top tips on how to keep moving when working. Are you...

Recalled To The Hall

The Greater London Authority has extended a contract  to provide City Hall with office and public area cleaning and porterage services with the incumbent...

London property developer Ballymore has launched Douglass Tower at its Goodluck Hope development on Leamouth Peninsula. Standing at the gateway to London on the River...