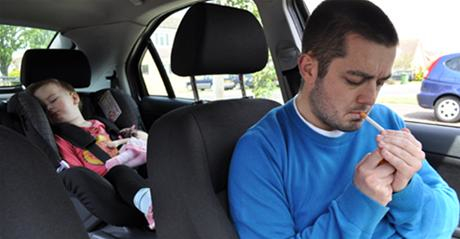 According to government figures, 3 million children are at risk from secondary smoking in vehicles and the law on banning this will come into force on 1 October 2015 in England and Wales – Scotland and Northern Ireland have yet to decide.

The British Lung Foundation welcomed the decision by MPs to respond to its arguments, along with other pressure groups like ASH. It sees the measure as one step in a more general fight against smoking.

"We urge the government to show the same commitment to introduce standardised packaging for all tobacco products, in order to protect the 200,000 children taking up smoking every year in this country,” said Penny Woods, CEO, British Lung Foundation. "We are certain that these measures together will prove to be two of the most significant milestones for public health since the smoke-free legislation of 2007."

The anti-smoking lobby point to the ‘facts’ about secondary smoking:

The ban will not be for those driving alone in a vehicle or to convertibles with the roof down but already those opposed to the new legislation have criticised it, especially on the grounds of enforceability.

"The overwhelming majority of smokers know it's inconsiderate to smoke in a car with children and they don't do it,” complained Simon Clark, Director, Forest, the pro-smokers' organisation. “They don't need the state micro-managing their lives. The police won't be able to enforce the law on their own, so the government will need a small army of snoopers to report people."

However, bans on smoking in cars when children are present already exist in some US states, including California, as well as in parts of Canada and Australia.