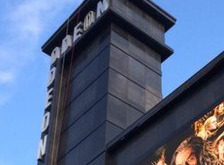 Firefighters came to the rescue of a giant 'O' on top of the Odeon cinema in Leicester Square yesterday afternoon. The five by four foot sign was left in a precarious position by high winds and crews were called to make the area safe. Firefighters with specialist rope rescue training abseiled down the tower and safely removed the 'O'. No one was hurt.

Station Manager Tim Kyte, from Soho fire station, who was at the scene, said: "Crews managed to bring the 'O' safely to ground level after an impressive spot of abseiling. We worked closely with staff at the cinema to bring the incident to a swift and safe conclusion."

A fire engine from Soho fire station went to the scene with fire rescue units from Clerkenwell and Paddington fire stations. The Brigade was called at 1022 and the sign was declared safe at 1253.

With ten London fire stations set to close this Thursday, 9 January, the Chairman of the London Fire and Emergency Planning Authority (LFEPA), James Cleverly, said today that Londoners will continue to be safe and receive the fastest emergency response in the capital, if not the UK.

The ten stations will be closed as part of the Fifth London Safety Plan (LSP), which sets out how the Brigade plans to keep Londoners safe over the next three years. 102 fire stations will continue to operate as normal providing London’s fire and rescue service. The Brigade needs to meet budget savings of £45 million over the next two years and the Plan will help it to meet £29 million of these savings.

The Brigade said that the changes will be made, whilst it continues to maintain existing response time targets of getting the first fire engine to an incident in six minutes, on average across London, and the second, if needed, in eight minutes.

As well as the closure of ten fire stations, the LSP includes plans to reduce fires amongst vulnerable groups, such as those living in sheltered housing; to lobby for sprinklers, particularly in the homes of those known to be most at risk from fire; to introduce cost recovery charges for repeat false fire alarm call outs and to continue to carry out thousands of home fire safety visits each year.

LFEPA Chairman, James Cleverly, said: “Londoners will continue to receive one of the fastest emergency response times in the world from the London Fire Brigade. If you dial 999 and need a fire engine, we still aim to have one with you within six minutes and a second, if needed, within eight.

“The Brigade is faced with significant budget cuts which mean that changes to the service are inevitable and we are able to make those changes without compulsory redundancies. The firefighters based at the stations closing will now transfer to other stations and continue the excellent work they do to prevent fires, which is vital in changing the behaviours that start fires in the first place.”

The ten fire stations are set to close at the end of the night shift (9.30am) on Thursday. The following 10 fire stations will close: Belsize, Bow, Clerkenwell, Downham, Kingsland, Knightsbridge, Silvertown, Southwark, Westminster and Woolwich.

There will be a reduction in the minimum crewing levels on fire rescue units from five firefighters to four firefighters.