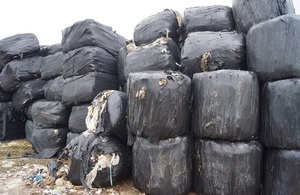 Hundreds of commercial properties are sitting targets for waste criminals the Environment Agency has said as it urges property and land owners across the South-East to be extra vigilant as baled waste crime is on the increase.

The waste is often plastic, builders, commercial or household rubbish that cannot be recycled and which has no monetary value. The waste is compressed into a bale and concealed by plastic strapping.

There have been incidents of large scale dumping of baled waste on sites across Kent, Surrey, Sussex and Hampshire since 2017. Commercial properties with associated land and roadways that allow vehicles to gain access and dump away from the view of the road and farms are the primary victims.

Meanwhile, criminal gangs are also using what appears to be legal and above board measures - they lease property and land and dump waste bales and then disappear without trace.

Alan Cansdale, an Environment Manager for the Environment Agency, said: These criminal offences have not been random or opportunistic dumping of waste but systematic and organised crime where secure sites have been targeted."

Most of the sites that have been targeted have been cleared at great expense - often in excess of £200,000 a site.

Know where your waste is going

The Environment Agency not only wants property and land owners to be more vigilant, they are also asking that businesses, organisations and individuals manage their waste responsibly to prevent it from getting into criminal hands in the first place.

Commercial property agents, trade associations and local authorities across the region have been given the following advice for landlords and landowners:

An investigation into dozens of giant heaps of waste dumped illegally across southern England has led to an arrest.

A 44-year-old man from Maidenhead, in Berkshire, was held at Eton Wick on 21 May, by Thames Valley Police in connection with large-scale illegal waste tipping across Surrey, west London, Buckinghamshire, Kent and Hampshire.

The spate of incidents started in March this year, and has so far seen 35 incidents of waste deposited unlawfully.

The arrest is part of an ongoing investigation between the Environment Agency and Metropolitan Police and Thames Valley and Surrey forces.

A tipper lorry and van believed to be involved in the illegal waste operation were seized as part of the operation. The investigation continues.

Picture: Baled waste an increasing problem in the South-East.

City of Westminster takes the top spot for gaining hefty fines in commercial fly-tipping fees for the past three years. Every year fly-tipping costs the UK...