Overcome by Emulsion - but Tube Workers Will Still Strike 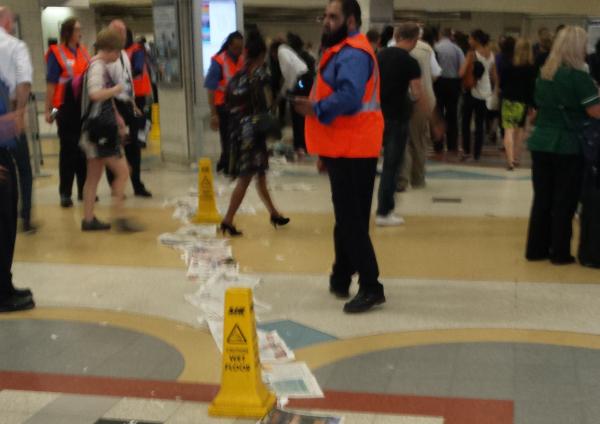 The scene pictured here is of Liverpool Street London Underground station foyer where a huge bucket of paint was spilt yesterday (Thurs 16).

Refurbishment work is going on with the public retaining access...hence the footprints and spatters. Copies of the London Evening Standard - given out free from newsstands - were put to good use to cover the stream. Underground staff put the 'cones' out and then vainly tried to persuade the travelling public to avoid the mess.

Whilst a good number of station staff were engaged in standing around and directing, only one poor soul, armed with a mop and bucket attempted to clean up.

When asked, the manager in charge could not say if they were dealing with gloss or emulsion - but mop and water had been employed regardless, suggesting the latter. The incident occurred at 3:30pm and was cleared by 10:00pm.

Despite their genial demeanour, the same staff will be striking next month - see below.

Picture: Putting a gloss on the situation but still overcome by emulsion.

Aslef, Unite and the RMT has been joined by TSSA (Transport Salaried Staffs' Association) in declaring a further London Underground strike (Weds evening to Thurs night August 5/6) over the introduction of 'the night Tube'.

ThisWeekinFM is asking if lots of Londoners will simply extend the weekend and take the rest of the week off?

Peace talks have 'stalled' at ACAS. TSSA General Secretary Manuel Cortes said: "We were expecting to agree a framework to discuss all our concerns over staffing levels and safety at the Night Tube as well as the pay issues. But all we got was a repeat of the 'take it or leave it' final pay offer which has already been rejected and no detailed talks on the Night Tube. LU seem to be treating ACAS as part of its PR spin that the unions are refusing to negotiate to end this dispute."

RMT (Rail Maritime and Transport) confirmed that members across London Underground will be taking strike action from 6:30pm on Wednesday 5th August to 6:29pm on Thursday 6th August.  The strike times for Tube drivers run slightly later, between 9:00pm to 8:59pm on the same dates. It is expected that the four unions will co-ordinate their strike time plans.

Steve Griffiths, London Underground's CEO said: "We will be at ACAS this week for further discussions to resolve this issue and trust the trade unions will be too."

Picture: Life's a beach during the Tube Strike? 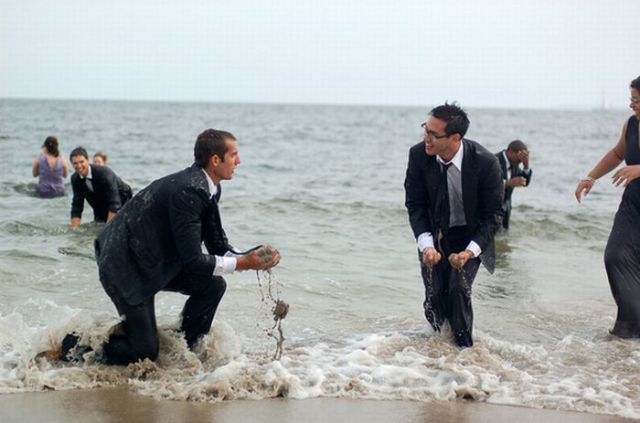 Aslef, Unite and the RMT has been joined by TSSA (Transport Salaried Staffs' Association) in declaring a further London Underground strike (Weds evening to Thurs...