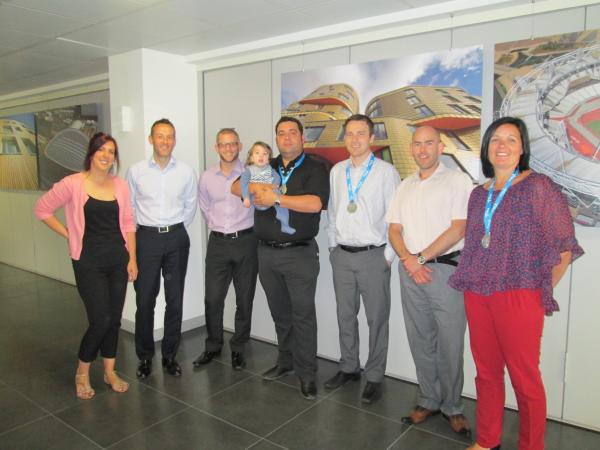 The Children’s Trust, is a charity that provides services and support to children with multiple disabilities.

“I decided to enter the race as my daughter has been using the services that the Children’s Trust provides and so I really wanted to give something back,” explained Andrew Leppard an IT manager for Prater, who was part of the eight-strong team. “I was delighted when some of my work colleagues decided to join me and it became a team event, particularly as on the day we were able to support and encourage one another during the race. The fact that my daughter can face her problems with a smile puts all the aches and pains into insignificance. The experience has already opened my eyes to new challenges and it’s comforting to know the amount we raised will make a real difference for children like my daughter.”

Pictured: Andrew Leppard, holding his daughter, Julie, with other colleagues from Prater who raised over £2,700, running in a recent 10km race, for the Children’s Trust

This Sunday Dave Sissens, from High Roding, will be attempting a first – running all the way between Paris and London including over the English Channel. ...

Getting to Grips with the Wonders of Reading

Under-fives in Tower Hamlets have been encouraged to become bookworms at the launch of Peabody and Vinci Facilities' new weekly book corner, Reading from the...

Pot of Gold at Rainbow

Contract cleaning and FM specialist, Nviro, has raised £2,700 for The Rainbow Centre in Fareham. The charity provides support for children and adults with...

Over 1,500 cyclists came together last weekend to take part in the ‘Mitie London Revolution’, a 192 mile cycle ride around London, and the largest multi-day...

The Grace Research Fund Fellowship has been launched with support from one of the world’s largest facility services providers, ISS Facility Services. The...

Workplace Giving Raises Ł30,000 for Together for Short Lives

Together for Short Lives was chosen as the official charity partner in July 2013 and cemented the launch of the PHS Group’s (an FM service provider) own dedicated...

A fundraising day in Wales has contributed to an ambitious goal for children’s charity. The event (main picture) was held by Caerphilly headquartered PHS Group and...

Milliband Explains Why the Living Wage Matters to Workers

It was an evening shift with a difference for the ISS cleaning operatives at KPMG’s Bristol office when Ed Miliband, paid an out of hours visit to meet them to...