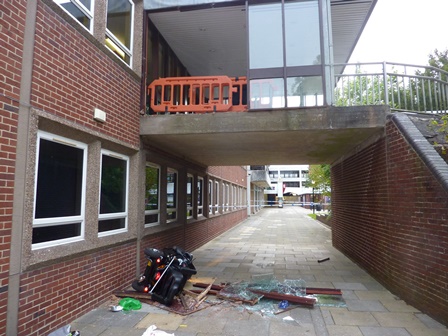 The NHS Litigation Authority has been prosecuted after an 82-year-old man fell 12ft to his death from an elevated walkway outside a health centre.

Benjamin John Withers from Fareham in Hampshire died after the mobility scooter he was driving collided with a wooden weather screen which was situated around the main entrance and access bridge to Fareham Health centre in September 2012.

The collision caused a section to give way and Mr Withers and his mobility scooter fell through the gap onto a walkway below.

Portsmouth Crown Court heard that Mr Withers had left the centre after attending an appointment and accidentally drove his mobility scooter forward into the side of the glazed screen instead of reversing away from it. After the initial impact he then moved forward again and fell through the opening in the screen which had partially given way.

A HSE investigation found the barrier had not been constructed to the required standard to resist impact from a mobility scooter. Neither has an assessment been made to consider the suitability of the weather screen and the structure had not been adequately maintained. The investigation also found that the collapsed section was so badly decayed that portions of the wood could be easily removed by hand. Planned maintenance work to replace the rotten wood had been cancelled and rescheduled on more than 20 occasions without ever being carried out.

“This has been a traumatic event for all my family, due to these breaches in health and safety our family has lost a devoted husband, father and grandfather,” stated Mr Wither’s son, Trevor, speaking on behalf of his family after the hearing.

Speaking on behalf of the HSE Inspector Michael Baxter commented: “This tragic incident could have easily been avoided if the barrier at Fareham Health Centre had met the well-known and established standards for design and construction of barriers and if the required maintenance had been carried out as soon as it was identified.”

Mr Baxter went on to observe that mobile scooters were being used increasingly, especially in pedestrian areas. “Businesses need to appreciate this and ensure existing structures and barriers are reassessed to ensure they are suitable for these machines,” advised Mr Baxter.

Picture: The tragic scene at Farnham Health Centre where a pensioner lost his life because of negligence