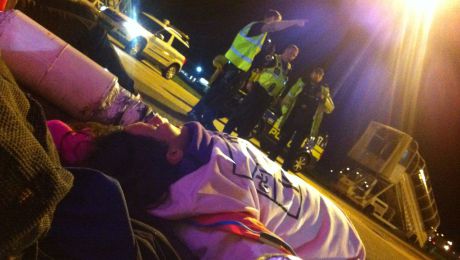 Activists from End Deportations, Lesbians and Gays Support the Migrants (LGSMigrants) and Plane Stupid prevented the departure of a deportation charter flight from Stansted Airport on Tuesday 28 night by charging on to a runway and locking themselves to the plane.

This is the first time this kind of action been exercised - and is another example of the rise of fringe protest organisations such as Black Lives Matter UK and the re-emergence of Greenpeace as an activist force.

One of the protesters at the scene, Emma Hughes from End Deportations, said: “This is an unprecedented victory in the fight against mass deportations. Last night was just the beginning." Sam Jones from Lesbians and Gays Support the Migrants said: “We must stop these violent mass deportations now.” Alex Thompson from End Deportations said: “We must not stand by silently, while the Home Office attacks our neighbours, our colleagues and our friends.” Susan James from Plane Stupid said: “Everything about these deportations points to the fact that they are inhuman, and must be stopped.”

Essex police were called at 9.30pm on Tuesday. The force has confirmed that seventeen people were arrested. As the plane involved was on a non-commercial runway, flights from the airport were only temporarily suspended.

Picture: Police arrived at a Stansted runway to find protesters had chained themselves to the wheel of a plane destined for Nigeria with deportees on-board