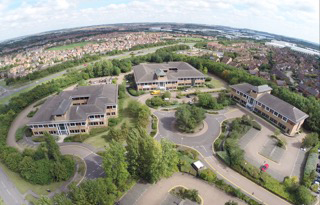 The £15 million development of Kents Hill Business Park has been proceeding according to plan in Milton Keynes.

Following the acquisition of the prime site in Spring 2014, Circle Property Management has spent another £4 million pounds on remodelling almost 70,000sq.ft of office space as the two existing buildings underwent a Grade A refurbishment.

Circle Property reports that it has reached Practical Completion of K1 (the first of the buildings) and secured 10,000ft let to a global pharmaceutical brand.

The investment in the two buildings is designed to create a ‘high spec’ living space. Among the improvements will be new double-height reception facilities, metal profiled suspended ceilings throughout with energy efficient LED lighting and new air conditioning. Each building will also benefit from improved landscaping and internal courtyards, along with on site car parking.

Along with the modern business environment, tenants at the new Kents Hill Business Park will also have access to established facilities, including the training and conference centres, hotel accommodation with 330 bedrooms, a ‘top quality’ food plaza and a health and fitness complex.

“Kents Hill Business Park is a key strategic acquisition for us and provides us with an opportunity to elevate the scheme to a new level in the regional market,” explained Ed Olins, Investment Director, Circle Property. “Our investment strategy means that we are investing heavily in transforming buildings with a specification not available elsewhere in Milton Keynes, while also taking a longer term view on returns.”

Agents for the London based owner, Circle Property Management, have stated that they have already received high-profile interest from occupiers attracted by its ‘excellent connectivity and strategic location’ near to the main regional road and rail networks.

The competition winning designs for a new museum and art gallery in Swindon - taking the Frank Gehry designed Guggenheim Museum Bilbao (1997) as inspiration - have been...