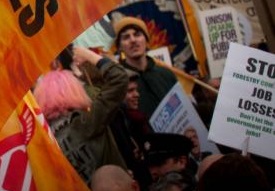 The Metropolitan Police’s admission of a role in the blacklisting of construction workers is not just a scandal but is a constitutional crisis deserving of a public inquiry according to the GMB.

Scotland Yard recently admitted Special Branch officers passed information to a controversial network that blacklisted construction workers. This admission came as part of the Mittings Inquiry which saw a variety of unions interested in its latest phase as many felt various members had been spied upon - or in some cases enticed into relationships with undercover cops.

The GMB was ultimately instrumental in netting £75 million for 771 claimants (circa 2014) including legal costs on both sides estimated at £25 million and is playing an active role in an ongoing public enquiry - where the police admission came to light.

The Mittings Inquiry (named after the current judge chairing it) started in 2015 to investigate and report on undercover police operations conducted by English and Welsh police forces in England and Wales since 1968.

Justin Bowden, GMB National Secretary, said: “The secret blacklisting of 3,213 construction workers and environmentalists was the greatest employment scandal in 50 years. When in 2013 GMB launched the first high court claims on behalf of those blacklisted there were many in the establishment who said we were paranoid conspiracy theorists.

“Admission by the police that they were directly and deeply involved in denying ordinary working people - who in many cases had done little more than raise health and safety concerns - from work and the chance to support themselves and their families is a constitutional crisis that can only be properly addressed by a full, independent public enquiry as the GMB has long maintained.

“This admission too raises some serious questions regarding other connected cases.”

Mitting’s impartiality has been questioned, most recently his stance saw a mass walkout of proceedings when the judge said a police officer with the code HN58 was very unlikely to have had any intimate relations with those he spied upon because he had been married for many years.

Subject to final checks, the Inquiry plans to publish a further six cover names during the week commencing April 16 - but true identities may never be declared (despite different unions outing those that have been recognised).

The Inquiry will release as much information about its work as possible, subject to legal or operational issues. The Inquiry will examine the contribution undercover policing has made to tackling crime, how it was and is supervised and regulated and its effect on individuals involved.

The Metropolitan Police's Deputy Assistant Commissioner Richard Martin recently admitted information that appeared on a Blacklist funded by the country's major construction firms, on the balance of probabilities, was supplied by the Special Branch.

The Metropolitan Police may now face action and the potential of large fines and a compensation order for assisting with the creation of a blacklist that logged trade union activities and also suggested barring workers who had made vociferous health & safety recommendations. It is now claimed, Special Branch added additional personal information such as political preference.

A mass walkout from the Mittings Enquiry in to blacklisting of construction workers has been followed by a police admission of spying. Although there was a mass...