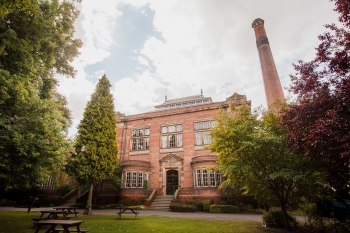 Abbey Pumping Station Museum in Leicester could be set for a £500,000 revamp as part of improvement works designed to increase visitor numbers and expand the display of  its historic collections.

The museum, which has had no significant investment for 20 years, is in a prime location next to the National Space Centre on the growing technology hub known as Pioneer Park.

It currently attracts about 50,000 visitors a year, and showcases the city’s industrial past with artefacts from the days of steam power, four huge steam pumping engines, and a large collection of historic vehicles, including an extremely rare early car built in Leicester in 1908.

Leicester City Council has drawn up a £500,000 programme of works, which would improve the building and its grounds, as well as enabling it to house industrial heritage items from Snibston Discovery Centre in Coalville, which closed in 2015.

The work includes spending £75,000 on improving the museum and pump house buildings, and £160,000 to enhance the museum grounds, including a better external visitor area and interactive play facilities.

The museum’s Transport Shed is so full of important vehicles that it is impossible to access or display them properly, so £65,000 would be spent on improving the shed to make more space for visitors to enjoy the displays.

About £130,000 could be spent on rationalising the collections and improving their display to ensure there is room to show off the best items and to store the others safely.

Developing the detailed designs for the museum and grounds to inform potential future developments is expected to cost about £70,000. Funding for the project will come from the city council’s Economic Action Plan budget.

The proposed works are estimated to take two years to complete – the improvements to the museum and its grounds, along with new signs etc are expected to be done during 2017/18, with works at the Transport Shed likely to be completed in 2018/19.

City Mayor Peter Soulsby said: “Abbey Pumping Station is a fascinating museum, and its amazing team of volunteers has helped bring the four steam-powered beam engines back into use - possibly the only working example of its kind.

“The museum is also in a prime location in the city, surrounded by planned developments throughout Pioneer Park.

“There are major projects planned at the National Space Centre, the development of the Dock 2 business hub, and proposals by the University of Leicester for a new Space Park Campus at the old John Ellis site next to the pumping station.

“In addition, a major new railway museum is being developed a stone’s throw away at the Great Central Railway’s Leicester North Station, so Abbey Pumping Station Museum is in a fantastic position to be a key visitor attraction in the Pioneer Park area.

“Currently the museum hasn’t got the room to display many of its fascinating attractions, and doesn’t make the most of its outside space.

“In addition to making improvements in the short term, these works would also position Abbey Pumping Station to make the most of future Space Park developments in the surrounding area.

“We have already made a bid to the Government’s Local Growth Fund to fund enabling works for the Space Park, and if we are successful,  providing better access to the museum could be included as part of that wider development.”

Central London office construction has continued to rise over the past six months, reaching 14.8 million sq ft, and setting a new eight-year development high in the...