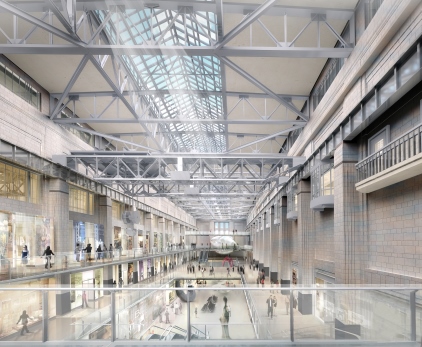 Detailed designs by Wilkinson Eyre Architects, who have worked closely with a number of stakeholders, including English Heritage and Wandsworth Borough Council, have been made available to the public on site from Tuesday 5th November to Sunday 10th.

The designs were unveiled at a public exhibition and showcase the plans for the refurbished Power Station, of which the Turbine Halls (pictured) are the focal points. The main objectives are to preserve and restore the architectural splendour of the building; to open it up to permanent public access; and to safeguard the building for the future by giving it a strong and sustainable economic rationale.

The designs build on the ‘Rafael Viñoly master plan’, which was approved by Wandsworth Borough Council in August 2011. Key proposed features include open, unobstructed turbine halls.Both turbine halls are to be left largely unobstructed internally so that visitors immediately experience the cavernous presence of each turbine hall and can enjoy the interior architecture at the scale for which it was originally designed. This has been achieved by proposing that the cafes, shops and restaurants that are all part of the redevelopment are recessed off the sides of the turbine halls.

A full height void (to provide views of chimneys from inside) will also be included. This space will be behind the southern wall of the Boiler House, thereby giving visitors the visual impact of views from the ground floor all the way up the internal wall and out to the chimneys above.

The creation of a new central atrium in the Boiler House, in place of the eight smaller atria will enable more natural light to penetrate the central part of the Power Station and allows visitors to see up to the sky from inside the building.

The addition of a concealed lift to provide access to a public viewing platform at the top of north-west chimney, is envisaged, that will enable visitors to enjoy panoramic views of London at a height of 110m without compromising the profile of the chimneys.

Under the proposals, the Power Station will be open to the public permanently, for the first time, in 2019.

It will contain a new events space; shops, restaurants and cafes; large open-plan office spaces; and homes on the top around a garden square in the sky, as well as to either side of the Power Station.

The consultation will be held in The View building on the Power Station site. Access is via Gate 2 on Kirtling Street, Times are as follows: