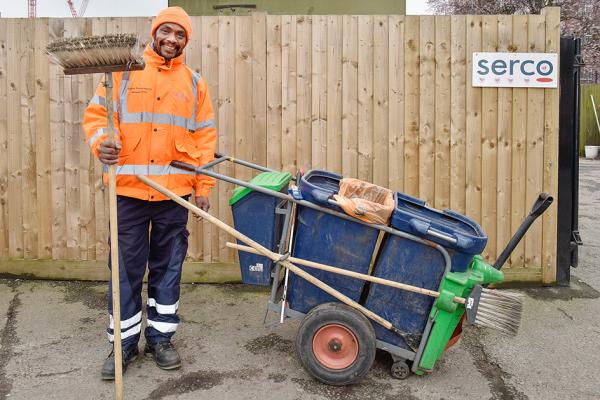 A Serco street cleaner working in the London Borough of Hammersmith & Fulham has won two awards for his hard work and cheerful, friendly attitude.

Lazarus Eliodore, 46, has worked for H&F’s refuse contractor Serco since 2011. He recently scooped both divisional and global ‘community awards’ in the company’s annual Pulse Awards scheme which recognises its employees who ‘go above and beyond the call of duty’. His cheerful attitude and determination to keep the streets he is responsible for clean had caught the attention of local residents who nominated him in appreciation of his work.

“Congratulations to Lazarus on his award and thank you for all his hard work helping keep our streets clean and pleasant for everyone,” said Cllr Wesley Harcourt, Cabinet Member for Environment, Transport and Residents’ Services, H&F.

After winning the divisional award, beating off competition from 119 other nominees, he was then also put forward for the global award which recognises the endeavours of Serco’s employees across its worldwide operations and won that too.

Lazarus, who works out of the Hammersmith Park depot, has now been given a special uniform to proudly wear with Global Pulse Award Winner 2015 emblazoned across it.

“Our Pulse Awards recognise individuals and teams who have consistently shown they care through their commitment and support to the local communities they work in or given a lifelong commitment to a cause that has benefited others,” said Lazarus’ manager.

Picture: Lazarus Eliodore impressed the residents of Hammersmith & Fulham in his duties as street cleaner and his own employer Serco, winning two awards in its Pulse scheme