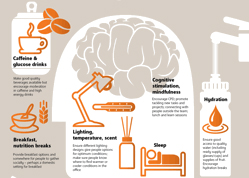 Workplace change management consultants at Advanced Workplace Associates (AWA) are urging business leaders to consider more laterally the factors that can make a difference to the productivity of their people, in order to better respond to the potential curveballs ahead.

Towards the close of the 2015/16 financial year, The Guardian newspaper reported that the UK productivity gap had widened to the worst level since records began with the country’s worker productivity levels markedly lower that the G7 average, according to ONS figures. There is also the uncertainty mounting regarding the UK’s position in the EU as to how possible reform may affect the economy.

AWA, in partnership with The Centre for Evidence Based Management, has conducted in-depth research looking at how to increase the performance of the ‘professional brain’ and consequently organisational brainpower. In addition to carrying out a ‘rapid evidence assessment’ to identify the best available evidence on the subject, the team translated the results into usable outputs and will be running organisational trials to apply them to leadership teams to measure the impact of applying the different interventions the research brought forward. AWA is enabling organisations to, in its own rather colourful language, to use this so-called ‘bulletproof research as a tool to unleash employees’ inner cognitive athletes’.

“This research is about providing leaders and their teams with a greater awareness of the things they should be doing personally to make sure their brains are in peak condition when they turn up for work every day,” explained Andrew Mawson, Founding Director, AWA and of its cognitive research programme. “It’s also about creating the right conditions for people’s cognitive performance to be at its very best and this work will have the greatest impact in knowledge-based organisations.”

Mawson argues that if the brains of everyone in an organisation were working at their peak, the impact on an organisation’s productivity and “bottom line could be enormous”.

AWA’s study looks solely at research that demonstrated a causal relationship between factors and effects and has revealed eight of the things that have an impact on cognitive performance:

Hydration – not drinking enough has an adverse impact on the brain as well as the body, memory, decision making and attention are all affected by dehydration.

Breakfast, nutrition breaks – the brain needs fuel, particularly after a night’s sleep when fluids, nutrients and sugars have been depleted. Malnutrition can influence many brain functions, including information processing and memory.

Sleep – it is necessary for all brain functions. Insufficient sleep affects concentration, decision making and relationships.

Acute exercise, physical activity – acute exercise and having an active lifestyle are promoted for physical health but also positively have an impact on all brain functions.

Lighting, temperature, scent – being uncomfortable distracts people from work. Being able to find the right conditions increases the chances of best performance.

Cognitive stimulation, mindfulness – demanding and varied activities have a positive impact on the brain’s performance. Mindfulness can help with focus and concentration.

Noise, speech, task interruptions – the workplace is full of distractions – noise, speech and being interrupted have an impact on concentration and focus to a significant degree.

Mawson believes the effectiveness of the human being on the payroll must be the priority if productivity is to increase. In order to get the best out of people and to tap into the factors that influence cognitive performance, business leaders need to consider the role of facilities and the workspace and the ways and means of educating the people who work in the organisation.

“We need to try and start getting a scientific movement in the direction of productivity. Work in knowledge based industries is a lot different to manufacturing or in service functions,” said Mawson. “We all have to be a little bit braver, have better, science based conversations and arguments because it’s only by applying the learning that we’ll improve cognitive performance and by doing that, it should improve business performance. It’s a great challenge and we have to be a little aggressive in our defence for the success of our economy.”

Picture: The UK has a poor productivity and AWA believes that management must think laterally to rectify this