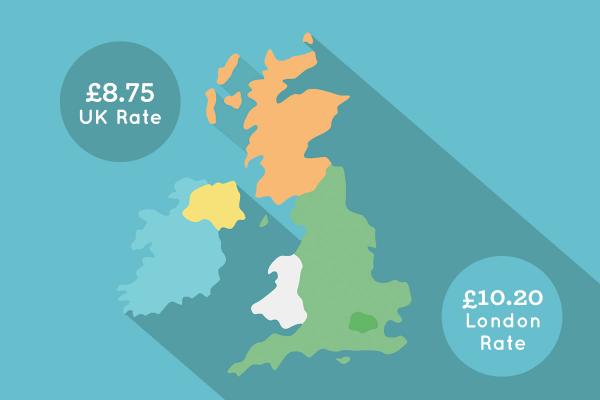 The Real Living Wage hourly rates have increased (on Nov 6) to £8.75 in the rest of the UK and £10.20 in London - that's £1.25 and £2.70 per hour more than the Real Minimum Wage (which also masquerades as the Living Wage ever since ex-Chancellor George Osborne hijacked the name).

The first day of the Week (which sees companies - including as considerable number of FM employers -  up and down the country doing their bit to celebrate their own Living Wage accreditation by encouraging others to join in) as Heathrow Airport becomes the first airport in the UK to sign up as a Living Wage mmployer - joining 3,600 UK Living Wage payers and 1,000+ in London.

The Living Wage rates are independently calculated, based on the real cost of living in the UK and London. The 2017 increases have been largely driven by higher inflation feeding through to the basket of goods and services that underpin the rates, with rising private rents and transport costs also having an impact. The rates equate to a 4.6% rise in London and a 3.6% rise across the rest of the UK.

Stuck in poverty - stuck on the Real Minimum Wage

Monday November 6's announcements came after new research published by KPMG on fireworks nignt showed that 5.5 million people across the UK are still paid less than the Real Living Wage - that’s 1 in 5 workers or 21% of the UK workforce.

Living Wage Foundation Director, Katherine Chapman said: “The new Living Wage rates will bring relief for thousands of UK workers being squeezed by stagnant wages and rising inflation. It’s thanks to the leadership of over 3,600 employers across the UK who are committed to paying all their staff, including cleaners and security staff, a real Living Wage.

“In-work poverty is today’s story. New figures show that 5.5 million people are still paid less than the real Living Wage – it’s fantastic that this year alone over a thousand more employers have chosen to go beyond the legal minimum and pay a real Living Wage, putting fairness and respect at the heart of their business.

“Great businesses know that, even during these tough times, not only is fair pay the right thing to do but paying the real Living Wage brings big benefits. Nine out of ten accredited Living Wage employers report real benefits including improved retention, reputation, recruitment and staff motivation.”

Living Wage rates are being launched at events across the UK during the week, in Edinburgh by the First Minister of Scotland, Nicola Sturgeon, in Cardiff by First Minister of Wales Carwyn Jones and being welcomed by metro Mayors of Greater Manchester, Liverpool City Region and Cambridgeshire and Peterborough.

Picture: The Real Living Wage hourly rates have increased to £8.75 in the rest of the UK and £10.20 in London