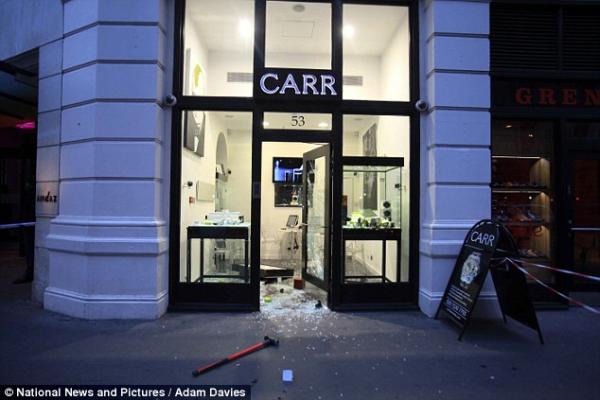 Following a number of similar raids as reported in ThisWeekinFM in 2014, yet another smash and grab raid has taken place on a jewellers - this time on London's Liverpool Street. An intervening police officer was threatened with machete.

City of London Police were called this Thursday to a smash and grab attempt in progress at a jewellers in Liverpool Street.

They discovered three men on two mopeds outside the shop where an officer at the scene was threatened with a machete when he confronted the group.

The officers followed the suspects to a car park in Gravel Lane where one was arrested.

Armed officers also attended the scene of the crime and at the time of going to press, two men remain at liberty.

The group had used sledgehammers to smash windows of the jewellers and this was subsequently recovered but no injuries were reported. The machete has also been recovered.

Pictured: Carr jewellers was the scene of an attempted robbery with sledgehammers and a machete but police foiled the attempt.