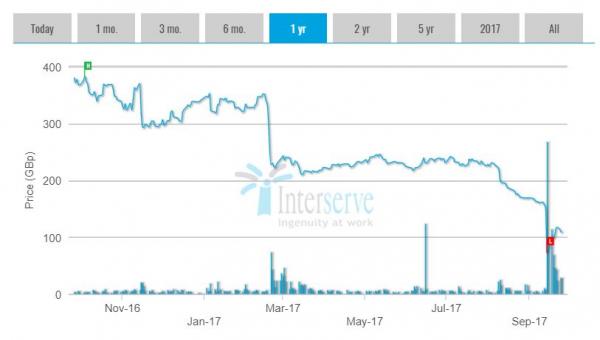 “Despite the increased political and macro-economic uncertainty following the UK’s EU referendum and recent general election, our outlook for the current year remains unchanged."

So said Glyn Barker, Interserve's Chairman recently as the company's financial results were declared. Unfortunately, the outlook Barker was referring to was a little short of dim if not completely disastrous. Now investors have lashed in to the firm for paying the CEO, under whose watch the outlook became quite so bad, a full bonus package on his departure despite him telling them all would be OK.

Adrian Ringrose was the CEO who not only led the  company to issue repeated profit warnings but also oversaw a massive crash in the international construction and support services share price - Interserve's value plummeted a whopping 50 per cent in the last month alone. This came after the company's financial report in August said it was sailing away from difficult times - only for the latest profit warning five weeks later to cause the markets to panic.

Apart from Ringrose heading out the door, the Board has also announced (in June) the departure of Group Finance Director, Tim Haywood, who is to step down on September 30 'in order to pursue other interests'. Haywood was expected to remain with the company until November 30 - but this is still to be re-confirmed. No new Group Finance Director has been found. Debbie White, the incoming CEO, took-up her role on September 1.

According to The Times Ringrose, (who left in August) departed on good terms and thus 'has been paid £325,593 in salary and unused holiday for the period to March 2017; and 2015 and 2016 share awards that will take account of his notice period rather than the end of his employment last month'. Ringrose will also receive a bonus payment and has already been handed £30,000 in incidentals.

Although the following now appears in Interserve’s Financial Report under the name of Chairman Glyn Barker, it is widely accepted as being the words of reassurance that came from Ringrose's lips. 'Performance in the first half of 2017 was achieved against a background of challenging market conditions, regulatory and political changes and expected cost headwinds. In our Exited Energy from Waste business we are making progress on all projects. Overall we continue to believe the provision taken in 2016 remains appropriate, although significant risks and uncertainties remain'.

Those significant risks and uncertainties turned out to be a much bigger (and easily foreseeable) downturn in the anticipated fortunes of both the construction and support services divisions along with a massive under-estimate of the cost of  the exit from the Energy from Waste business. £160 million was the amount set-aside, which is now expected to be significantly exceeded...it was set at 'just' £70 million in May 2016.

The 'Glyn Barker's Financial Report' published in August continued: 'In the UK, we expect actions taken in the first half, both in construction and support services, to lead to a better performance in the second half. In the Middle East, we see the outlook in the region as broadly favourable, notwithstanding the potential impact on general economic activity in the region of continuing political tensions between Qatar and other GCC states. Construction International has made good progress, while the actions we have taken to reduce our cost base in Support Services International have created a smaller but more resilient business'.

Interserve will need to be resilient as it joins Mitie and Capita and G4S and Serco and Carillion et all with mud on their faces and a Government wondering where to turn to avoid unpleasant associations - although bad press is one thing, share holder anger another.