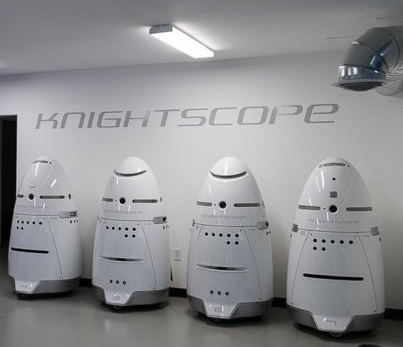 The concept of robots replacing security guards took a knock when one ran into a child at a shopping centre in California.

Technology that some have said will replace the need for human control was questioned when a robot security guard operating in Stanford Shopping Center [sic] in California ran into and over a 16-month child causing injury.

Talking to the local television station, the mother stated that the 135kg robot “hit my son's head and he fell face down on the floor. The robot did not stop, it kept moving forward” causing some bruising to his foot and a sore head.

The Knightscope robot has been used for security duties in the shopping centre, especially on the lookout for known shoplifters. Known as K5, it would be difficult for adults to miss at 1.5m tall and 0.9m wide. The robot had pre-determined routes and is fitted with GPS, lasers, sensors and cameras, all designed to avoid obstacles and monitor surroundings – but maybe not lively children.

In defence of its robot which also patrols the car park, a statement from Knightscope appeared to put some of the blame of the child: ‘The machine veered to the left to avoid the child but the child ran backwards directly into the front quarter of the machine at which point the machine stopped and the child fell on the ground. The machine's sensors registered no vibration alert and the machine motors did not fault as they would when encountering an obstacle.’

The company has invited the child and rest of the family to its offices but was at pains to point to its record so far using these robots. It noted that there had been 35,000 hours and more than 25,000 miles covered without any ‘reported incidents’.

Picture:   Would this have ever happened with Doctor Who’s K9 when Kinescope’s K5 robot ran into a child in California?