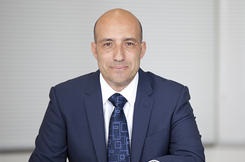 The Mace Group Board has appointed Ross Abbate as MD of Macro UK, Europe and North America with immediate effect.

The appointment follows the departure of former MD Debra Ward, who has left to take up an opportunity with a company she worked with.

Previously Deputy MD of Macro, Ross Abbate joined the company in 2007 and was made a Director in July 2009. During this time he was responsible for the growth of the business, resulting in new contracts with clients in the UK, US and Caribbean.

More recently, he has been responsible for extending the company’s operations into new countries, including Greece, Turkey, Denmark, Sweden, the Netherlands and Portugal and has over 18 years’ experience in working within the FM industry.

“We’re currently managing over 20m sq ft for our clients in over 23 countries across EMEA, North America and India and I’m looking forward to working with the team to continue to deliver outstanding projects for our clients,” said Ross Abbate on his appointment.