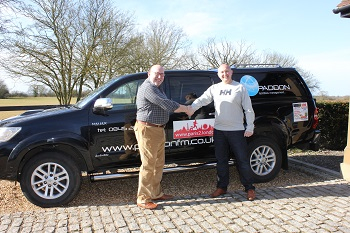 This Sunday Dave Sissens, from High Roding, will be attempting a first – running all the way between Paris and London including over the English Channel.

His aim is to raise at least £50,000 for Children with Cancer, a charity he has supported since 2002. Helping him in this are P&O Ferries which will be providing a treadmill on board its ferry to enable him to keep on ‘running’ and Paddon Facilities Management that will be providing the support vehicle which will be driven by his wife, Gilly.

“I invested a little time in researching what I would like to do and I discovered that no one has ever run mile-for-mile from Paris to London, explained Dave Sissens. “Many have covered the distance but in terms of running every mile, no one has covered the 20 plus miles that include the ferry crossing. With the help and support of P&O Ferries, I will cover that distance on a treadmill that they will set up on board the vessel.”

This is not the first time that he has undertaken challenges for charity, having completed many over the years, including a trek to the North Pole in 2012.

Picture: Tony Murphy of Paddon FM (left)  is seen with Dave Sissens (right) prior to the charity run to Paris this Sunday.