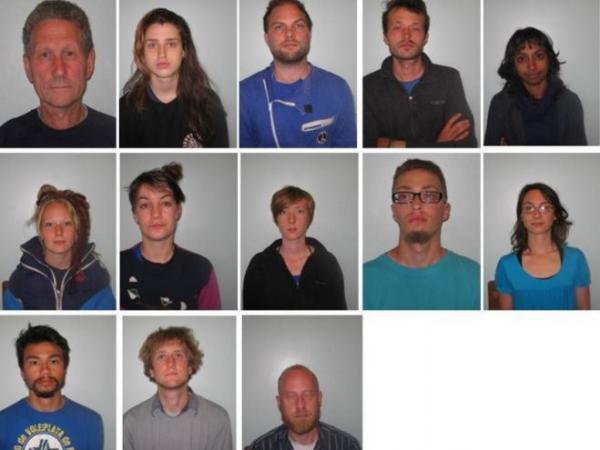 13 protestors have been sentenced having previously been found guilty of being unlawfully airside at Heathrow Airport and aggravated trespass.

On July 13 2015, the 13 (who had travelled in groups from different parts of the country most of which are not affected by Heathrow) made their way onto the north runway by cutting through a perimeter fence line. They then built a metal tripod structure and locked themselves to it.

Police were called at around 03:45hrs on 13 July 2015 to reports of suspicious activity at a perimeter fence, separating the airside operational part of the airport with the public road.

Officers attended and found the fence cut and several bolt-cutters discarded at the scene.

The area was then searched and the protestors found at the eastern end of the north runway.

They had built a tripod out of scaffolding poles and surrounded themselves with 6ft high metal fencing. The protestors, campaigning against expansion at Heathrow, had then locked themselves onto the structure or in pairs with arm locks filled with expanding quick set foam.

The design of the structure and 'lock-ons' meant that neither the metalwork nor the protestors could easily be moved.

The protestors were arrested in situ and specialist officers then called in to safely remove them.

A number of items were seized, including superglue, locks, chains and pieces of steel pipe.

The northern runway was finally cleared for full operational use at 10:02 later that morning.

Superintendent Andy Jones, from the Met's Aviation Policing, said this week: "While it is the role of the police to facilitate peaceful protest it is also our role to uphold the law and to allow businesses and the public to go about their lawful business. When protestors encroach into the airside environment they not only cause major disruption but also significant danger to themselves and aircraft.

"I appreciate that airport expansion will trigger protest but I would urge those considering such action, to do so peacefully and within the bounds of the law."

Sentenced at Willesden Magistrates' Court to six weeks' imprisonment suspended for 12 months were:

Each defendant was sentenced to 120hrs community work except Basto, Thompson and Paffard who will complete 180hrs.

The protestors were found guilty on Monday, 25 January.

Picture: The gang came from clusters around the country