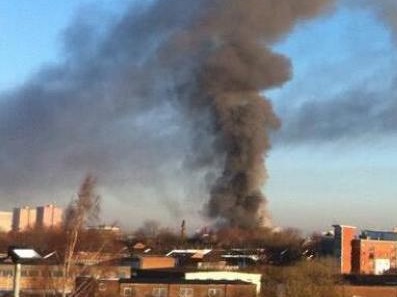 Councillor David Acton, who heads up a team of 30 local councillors who form the authority, said the fire in Duncan Street was the third large-scale incident at a recycling site in less than six months.

And he said earlier fires in similar businesses showed that sprinkler systems do work - providing safety for local residents and firefighters tackling a blaze.

Councillor Acton said: "Two fires at a recycling site in Stockport proved that sprinklers work. We had the Junction 25 fire in Bredbury which lasted 26 days and smouldered for a further seven when there were no sprinklers.

"There was a fire at a similar site nearby shortly afterwards where sprinklers were installed and the fire was extinguished within hours, meaning the business could be back up and running the same day."

Greater Manchester Fire and Rescue Service (GMFRS) is campaigning for sprinkler systems to become legally enforceable, particularly in premises of this type but also in commercial buildings and blocks of flats in a bid to reduce deaths and injuries in fires but also to protect their own staff.

Acton continued: "The fire in Duncan Street has been burning for more than a week and we are still working hard to remove the waste and ultimately put the fire out.

"It has been a complex and challenging incident to deal with and we have committed significant resources to it. Had these premises been fitted with a sprinkler system there is every chance we would not be in this position."

Acton also called for tougher and more rigorous regulation for sites that manage recycled waste. He added: "These sites are problematic and provide a very real danger not only to local residents living nearby but the environment and not least our own firefighters when they set on fire. We have to get tougher on how material is stored and how these sites are managed."

Officers from GMFRS have been working with partner agencies at the Duncan Street fire including the Environment Agency, Public Health England, Network Rail, United Utilities, North West Ambulance Service, Greater Manchester Police and local authorities to minimise the effects of the fire on local people, businesses and the environment.

The blaze broke out just before 11.30pm on Sunday, March 2, and GMFRS has been working hard to extinguish it since then, committing significant resources including fire engines, specialist vehicles and around the clock crews from across the area.

A fire that started at a recycling plant in Salford, Manchester (Duncan Street) just before Midnight on Sunday is now under investigation – while firefighters...