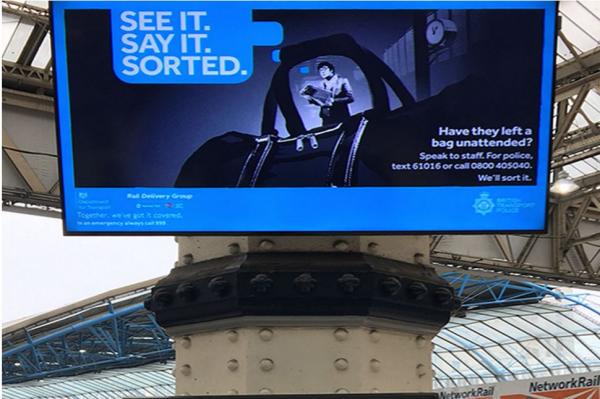 A new campaign started at major railway stations week ending November 4 and will be rolled out across the rest of network in England, Scotland and Wales.

It is intended to encourage train passengers and station visitors to report any unusual items or activity. Rail Minister Paul Maynard was at London Waterloo to get the scheme underway.

Designed by government, police and the rail industry, the new campaign aims to help build a more vigilant network on railways across the country and raise awareness of the vital role the public can play in keeping themselves and others safe.

Passengers arriving at major train stations on November 1 in London, Birmingham, Glasgow, and Manchester were among the first to hear updated security announcements and see posters promoting the new ‘See it. Say it. Sorted.’ campaign message.

Everyone who uses the rail network is being urged to report anything unusual either in person to rail staff, by texting British Transport Police (BTP) on 61016 or calling 0800 40 50 40, helping to keep the UK’s rail network safe.

Paul Maynard said: "We want to send a clear message to anyone threatening the security of the rail network that there are thousands of pairs of eyes and ears ready to report any potential threat to the British Transport Police and rail staff who are ready to respond to these reports.

"The campaign is aimed at our railways but the recent incident at North Greenwich underground station, where an alert member of the public reported an unattended bag to a member of staff, reminds us just how important it is to be vigilant."

British Transport Police Temporary Assistant Chief Constable Alun Thomas said: "Don’t be afraid to report anything that feels out of place. We rely on information from the public to help us keep the rail network safe. It could be someone avoiding rail staff or police, leaving a bag on the railway, checking out security arrangements like CCTV or trying to access staff-only areas. If it doesn’t feel right, we want to hear from you. Let us decide if what you have seen or what you know is important. We will check the information thoroughly."

A new poster campaign started at major railway stations on November 1 to be rolled out across the rest of network. Now it's been pulled on the grounds it echoes a...