Seeking out the Real Threat 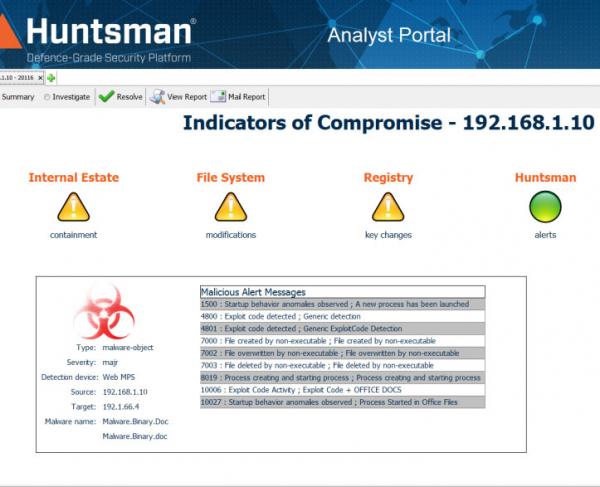 Huntsman ATV automatically verifies in seconds whether reported threats are real, if they pose an unacceptable risk to the organisation and what options are available for decision making. By eliminating false alarms and verifying the threats that matter, Huntsman ATV is being offered as bridging the gap between detection and response by instantly sending high priority information to security analysts for their immediate attention.

Given that cyber attacks require quick responses to limit damage, the actual periods organisations and businesses take to recognise and take action can be surprisingly slow. In May 2015 the Ponemon Institute surveyed 350 companies spanning 11 countries to identify the financial risks associated with leaving a businesses exposed to threats.

The study entitled Cost of Data Breach Study: Global Analysis, found that the estimated mean time to identify threats is 206 days with the mean time to contain them at 69 days. The average consolidated total direct and indirect costs of each data breach came to US$3.8 million, representing a 23% increase since 2013. Huntsman argues that these delays are the result of ‘intelligence overload’ caused by the mismatch, yet reliance, of human-scale analysis and interpretation of massive amounts of machine generated data.

The Huntsman Analyst Portal with its ATV technology, is said to eliminate false alarms and identify only the ‘threats that matter’ so analysts can quickly mitigate risks, pinpoint and isolate compromised assets and limit the time-at-risk. By streamlining routine activities and analyst workflows through automation, Huntsman Analyst Portal manages the scale of the analyst operations, simplifies their processes and frees them to be involved in the activities of hunting and security profiling.

“Huntsman has shown an ability to reduce the delays between detection and response through both the elimination of false positives and automation of the threat management process thereby creating a huge win for overburdened response staff,” commented David Monahan, Research Director, Enterprise Management Associates.

Picture: Eliminating unnecessary information to counter potential cyber attacks is claimed to be one of the benefits of the Huntsman Analyst Portal