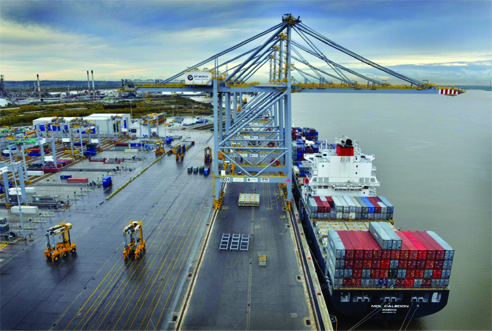 The port is the outcome of more than a decade of planning and construction across three square miles of development, with the claim that it will provide UK exporters and importers with a more efficient way to ship globally and at less cost.

London Gateway is now operating with its first berth open and when fully developed, will operate six berths, with a total of 24 quay cranes and will be able to handle 3.5 million tonnes a year. Over 30% of the containers moving through the port are planned to go by rail. The state-of-the-art terminal can handle the longest trains in the UK. DB Schenker Rail UK and Freightliner are both providing rail services to the new port.

Thousands of new jobs have been created in the construction sector during the past 10 years at the site. According to a study by Oxford Economics, once fully operational, London Gateway will create 36,000 jobs and contribute £3.2 billion to UK GDP annually.

Both Prime Minister David Cameron and the Mayor London, Boris Johnson, have sung the praises of the Dubai based DP World owned port with the former describing it as ‘an emblem of ambition’. The trades unions have been less than enthusiastic with Unite claiming that there has been an unwillingness of the owner to enter into discussions over union recognition. For its part, DP World has stated that if a majority of the workforce wants this, it will talk to the relevant unions.

London Gateway is located closer to major population centres of London, Birmingham and Manchester than other ports that are capable of handling the world’s biggest ships. The new port will reduce transport costs for exporters and importers by reducing millions of trucking miles from supply chains.

DP World, a leading global port operator with more than 65 marine terminals across six continents, including new developments, built Britain’s new port for today’s and the next generation of ships. Known as ‘ultra large container ships’ (ULCS), they are up to 400 metres long and can carry over 18,000 shipping containers.

The first scheduled ship to dock at the port, operated by MOL Liner, received exports and delivered containers carrying a variety of cargo, including fruit and automotive parts, which will be distributed across the country over the coming days. The MOL Caledon is part of the South African Europe Container Service (SAECS) which is made up of a consortium of shipping lines including MOL, Maersk, DAL and Safmarine.

Sultan Ahmed Bin Sulayem, Chairman, DP World, said: “We are contributing to the UK economy by building and operating this state-of-the-art modern infrastructure that will support trade growth far into the future. This is the first port to be built in the UK in a generation and so there is nothing else like this in the country. From today, shipping lines can now bring the world’s largest ships closer to key UK markets and reduce the costs of transportation. At the same time, global businesses can make their supply chains more efficient. It’s a real pleasure to be able to stand side by side with MOL on this historic day.”