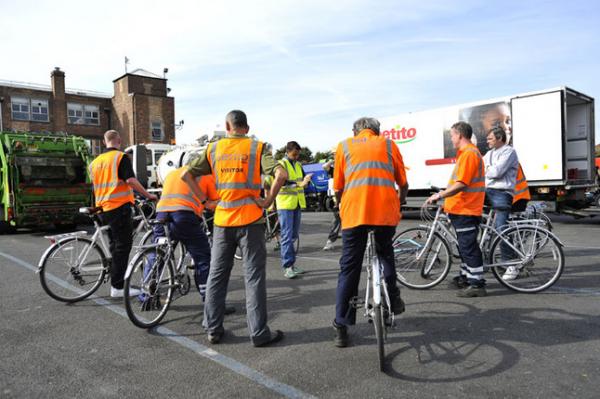 This week saw truck drivers riding around Belfast on cycles as part of a new scheme aimed at improving safety for all road users.

The Driver CPC accredited course has been developed by the FTA and Sustrans in partnership with Cycle Training UK (CTUK) and is funded by the Public Health Agency (PHA) and Belfast Strategic Partnership.

During the one-day course drivers got on cycles to experience the road from a cyclist’s perspective. The course was piloted at the end of June with 10 Belfast City Council drivers and is now being introduced further.

FTA’s Seamus Leheny said the association was delighted to be involved in an initiative designed to improve road safety and increase awareness. “We represent 14,000 members in the UK who operate over 200,000 commercial goods vehicles which is around half of the UK fleet. Our members take road safety awareness very seriously and are working hard to reduce the fatalities involving lorries on the road. We are pleased to work with Sustrans in developing this training course and are delighted at the uptake to date.”

The Safe Urban Driving programme was launched on Thursday, 6 August at Writers Square opposite St Anne’s Cathedral, Donegall Street, Belfast. As part of the course on the day, a leaflet was produced highlighting safety tips for both drivers and cyclists.

The initiative is designed to show that a good level of cooperation can be reached between two groups of highway users who can seem at odds with one another over limited road space. “Sustrans was pleased to work with the FTA on a training programme and awareness campaign to ensure both drivers and cyclists can safely share road space,” stated Karen Mawhinney, Sustrans Cycle Skills Unit Co-ordinator in Northern Ireland. “As the number of cyclists increase, we have seen a rise in casualties, particularly involving lorries.”

Picture:   This week saw a welcome day for raising awareness between heavy lorries and cyclists in Belfast. Picture with thanks to the London Cycling Campaign is used for illustration and is not from the campaign held August 6.