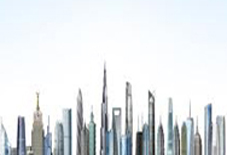 No sooner has the global economy steadied itself a little than new skyscrapers are shooting out of the ground all over the world and reaching dizzying heights that would have seemed unimaginable only a few years ago. A simple comparison illustrates the point: the average height of the ten tallest skyscrapers currently under construction is a whopping 114 meters more than that of the ten tallest completed in the last decade.

Emporis, the international provider of building data, has compiled a list of the Top Ten tallest skyscrapers currently under construction. No few than seven of the ten giants are rising in China, where the desire to achieve architectural superlatives is clearly undimmed. The leader among the skyscrapers of the future, Kingdom Tower, is however to be found in Saudi Arabia. Construction work on this colossus among buildings, which is set to become the first to break the magic 1,000-meter mark, began in March this year and is due to be completed in 2018. The skyscraper will then tower over even the world's current tallest building, Burj Khalifa.

At 636 meters, the Wuhan Greenland Center is third in the list of the world-beaters of the future, closely followed by Shanghai Tower, which is only 4 meters shorter. Having recently reached its full height of 632 meters, the latter is already celebrated as China's tallest building; when finally completed next year, its 121 floors will house office space and a luxury hotel.

In the Americas, there is only one skyscraper under construction able to even partly compete with the giants from the Far and Middle East, and that is the 541 meter tall One World Trade Center in New York, due to be completed this year. Even now back in seventh place on the under-construction list, in a few years' time the one-time world-leading skyscraper power U.S.A. will no longer have even a single entry among the Top Ten tallest buildings in the world.

A source of particular excitement in recent weeks was the Chinese skyscraper project Sky City, located in Changsha. At 838 meters in height, the tower is projected to be 10 meters taller than Burj Khalifa. A construction time of ten months would also make it the fastest-built skyscraper in the world. Whether the ambitious mega-project will truly see the light of day in 2014 as planned, is currently debatable. According to media reports, construction work was halted only a few days after the foundation stone was laid.