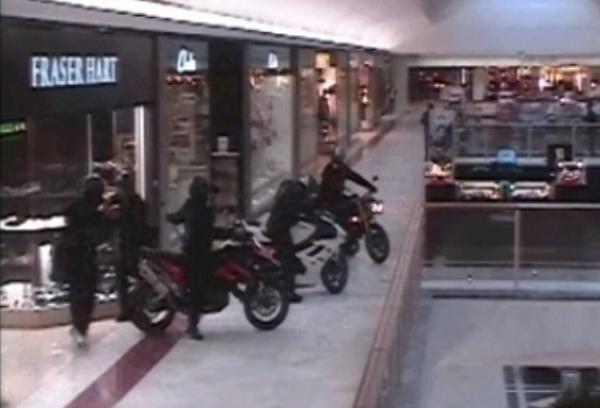 Police had to responded to a robbery early on Wednesday morning at Brent Cross shopping in London and arrested five men involved in a smash and grab raid.

A search of the area was conducted by officers, with the support of police dogs and a helicopter. Five men, aged in their 20s and 30s, have been arrested and were taken to a north London police station. A quantity of jewellery and watches was recovered, in addition to weapons including sledge hammers and pick axes.

Enquiries continue to identify and apprehend the remaining suspects and to recover outstanding stolen property.

Inspector Fifi Gulam-Husen of Barnet Police said: "This morning's arrests demonstrate our determination to act with speed, intelligence and tenacity to catch criminals and to keep Londoners safe."

Picture: CCTV pictures have been released of the Brent Cross raid

A Metropolitan police officer remains in a serious but stable condition following his involvement in arresting smash & grab moped raiders who had targeted a...