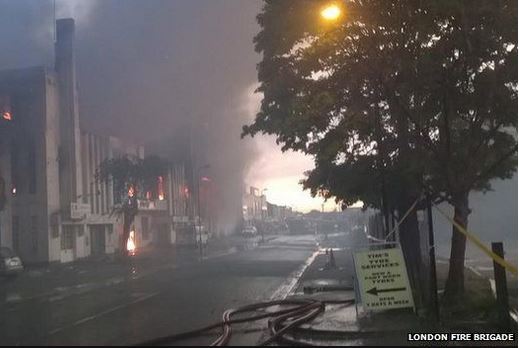 Around 120 firefighters and officers tackled a fire at a warehouse containing a number of commercial and factory units in London on Saturday night (Jul 4).

The blaze occurred in the district of Perivale (near Wembley) in North-West London which is known for being one of the industrial and warehousing areas and about eight miles from the city centre. The blaze gutted the large 75 metre by 75 metre building. At the height of the fire, smoke could be seen from across the Thames and over into south London.

Around 30 people left the building before the Brigade arrived and there were no reports of any injuries.

Station Manager Jeff Lisle who was at the scene said: "Crews worked very hard in extremely difficult conditions to bring this fire under control. Firefighters used aerial ladder platforms to tackle it from numerous vantage points and to prevent the blaze from spreading to neighbouring warehouses.

“Although not in a residential area the smoke from the fire was travelling quite a distance so we advised locals to keep windows and doors shut as a precaution."

The Brigade was called just before 7:00pm and the fire was under control before midnight. Crews spent Sunday damping down the fire. The cause of the fire is under investigation.

Earlier in the week (Weds 1), fire crews were called to a small fire in a plant room at Wimbledon tennis club and around 3,000 people were evacuated as a precaution which is standard procedure while crews assessed the fire. Around 25% of a plant room near a restaurant was alight.

As well as 18 firefighters and officers, there were also a number firefighters already at the club who volunteer to act as fire patrol  during the tournament. Their roll is to  respond to fire alerts, assess the scene and inform London Fire Brigade’s control centre as necessary.

Picture: Smoke from a London warehouse fire could be seen across the Capital.