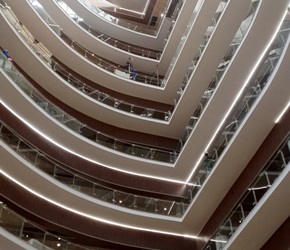 A number of natural ventilation and smoke control systems have been specified to improve safety at the new, sustainable Agrivaal building in Pretoria.

Standing at 10 storeys high, the new office block integrates with Pretoria’s original Agrivaal building which is deemed a site of national heritage importance for the last 75 years.

The final structure that has been designed by PKA Architects for the National Department of Public Works (DPW), provides over 21,000sqm of rentable space, alongside a restaurant, several coffee shops and more than 500 underground car parking spaces.

The natural ventilation was developed by SE Controls Africa. The company worked alongside the project’s ventilation contractors and fire and engineering consultants to produce a smoke and natural ventilation system for the establishment. It incorporates a NVLogiQ carbon dioxide sensor which works to monitor the temperature, carbon dioxide levels and relative humidity and signals the system’s 10 SECO N 24 40 chain actuators to open and close.

It also features a SHEVTEC smoke control panel which takes a signal from the building’s fire and smoke alarm system in the event of a fire. This overrides the natural ventilation system and triggers the actuators to fully open, allowing smoke to be vented safely from the building.

Picture: Natural ventilation systems from SE Controls is helping to provide safe and healthy conditions at the Agrivaal building in Pretoria