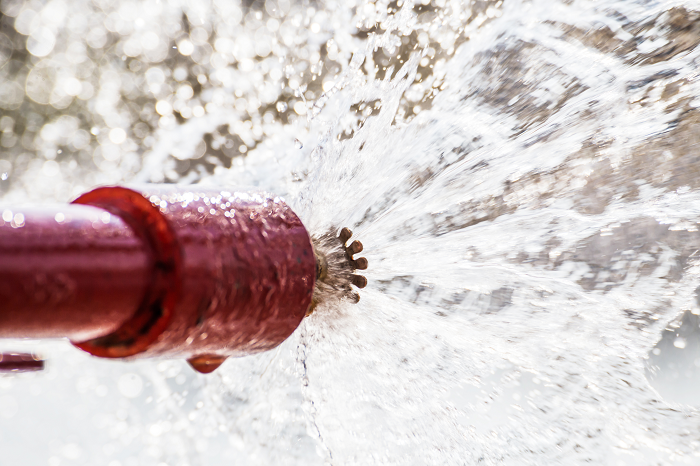 When writing the title of this article, we debated heavily if the “vs” was entirely appropriate – historically there has been a sense of rivalry between the two fire safety solutions but in reality the world is a more pragmatic place and there are certainly appropriate cases for one, the other, or frequently both combined at the same site.

This latter aspect is the one that’s most tricky to boil down for an article, as the ways smoke ventilation systems and fire suppression systems (such as sprinklers) interact with each other are numerous. The complexity of this interaction is such that no piece of research we’re aware of has conclusively described their behaviour. Hence we will continue to recommend the adoption of a fire-engineered approach that determines what’s appropriate on a site-by-site, situation-by-situation basis.

Firstly, a tiny bit of back-story to fill in any gaps:

What are smoke control systems?

Fire is hot, dangerous to people and damaging to buildings and assets. But it’s not often what causes injuries or fatalities directly. That role falls to smoke, which is also hot but is full of toxic chemicals, travels extremely quickly and can completely obscure escape routes or fire fighter access in minutes. A smoke control system will guide, block and channel smoke away from said escape routes and allow for simpler and quicker fire fighter access by venting the smoke in accordance with the designed ventilation strategy. For example if a fire were to break out in one room of a hotel, the smoke on that floor could be vented out of the building via a dedicated a smoke shaft. Automatic opening dampers will be fitted at each level and interfaced with the fire alarm such that only the damper on the fire affected floor will be activated.  This is meant to achieve a better and more accurate performance of the system, preventing an excessive spread of smoke and keeping the stairwells clear.

What are fire suppression systems?

When a fire breaks out, a fire suppression system takes on the role of an immediate fire fighter, dousing flames with water, CO2 or foam in order to stop its spread. You’ll likely have seen the little shower-head like devices in hotels or other large buildings, and while there’s a certain undeniable logic to their use, there are significant downsides. Primarily among these is the potential for water damage to a building and its assets to far outstrip the damage that would have been caused by a relatively small fire. However, water damage from a building sprinkler system will be much less severe than the damage caused by water from fire fighting hose lines or smoke and fire damage if the fire is allowed to spread. Quick response sprinklers release 8-24 gallons of water per minute compared to 80-125 gallons per minute discharged by a fire hose.

What are the standards?

EN 12101-5 has a section specifically regarding the interaction between sprinklers and SHEVS (smoke and heat ventilation systems): “Sprinklers reduce the probability of a fire becoming large. A sprinkler system aids the fire brigade by keeping the fires small, since it is easier for them to fight small fires more effectively with less damage. Generally the SHEVS helps the fire service by creating a smoke free zone. SHEVS cannot control the fire growth. They delay the filling of the building with smoke and delay the rise of gas temperatures in the thermally buoyant smoke layer.

“In practice, many fires are controlled by sprinklers, but are extinguished by the fire brigade and sprinklers acting together. SHEVS can be of tremendous benefit to the fire services.”

We’ve highlighted this particular passage as it seems to get to the route of the issue – the fact is that fire sprinklers and smoke control systems ostensibly fulfil very different roles during a fire, each of which is entirely valid and valuable. The most pragmatic approach, therefore, would be the specification of a fire safety system that incorporated both elements, wouldn’t it?

The main bone of contention is with detection. The reasoning goes that, if sprinkler systems are reliant on heat to activate, the action of smoke ventilators could delay this process. The same contention works the other way around: local effects of the sprinkler spray and its cooling effects on nearby natural ventilators can reduce the capacity of removing smoke out of those ventilators.

Some also point to the availability of oxygen caused by a smoke ventilation system’s inlet air function negating the effectiveness of the sprinkler setup. However testing in the USA some years ago [https://www.nist.gov/publications/modeling-sprinkler-vent-and-draft-curtain-interaction] revealed these to be non-issues in most situations. It is true that inlet vents will provide more oxygen to the fire which could cause it to remain alive and possibly spread elsewhere, although its spread will be limited due to reduced temperatures and radiation levels (removing smoke = removing heat).

However, with the presence of the sprinklers, as they are triggered by a rise in temperature, typically only the sprinkler closest to the fire will activate. From NFPA journal statistics, roughly 85% of the time, when there’s a fire, just one sprinkler operates.

To clarify EN 12101-5’s points regarding the difference between the two systems: “a SHEVS is often used to protect the means of escape, regardless of the expected time of arrival of the fire services. A SHEVS is not able to cope with fires larger than the assumed design size.

“Sprinklers (without a SHEVS) are not always specified to protect means of escape in buildings although it is recognised that they can provide a useful contribution by delaying the build-up of smoke and heat as a side benefit to controlling the fire. Quick response sprinklers are more effective in a life safety role than standard response sprinklers.”

The problem arises when sprinkler systems and smoke ventilation systems (SHEVS) start to interact when both are activated. Again, refer to the standard: “it is necessary for designers of buildings with both SHEVS and sprinklers to consciously avoid creating situations where a localised downdrag of smoke could obscure an escape route from another region of the building.”

When it comes to combining systems, it appears a belt-and-braces approach with redundancies is the best way forward. To quote the standard one last time: “The sprinkler spray on nearby natural ventilators can reduce the efficiency of those ventilators. Since it is usually unlikely in a successful design that more than one natural ventilator will be affected, it is possible to adopt the guideline of discounting one ventilator. It is necessary to always fit at least one more ventilator than is recommended by design calculations that ignore local SHEV/sprinkler interactions.”

It seems a combined approach is possible, viable and may offer the best long-term solution, so we’re calling for better co-ordination between industries and trades, and a greater focus on specialist maintenance provision to each system to ensure they’re fit for purpose.

Sprinkler and smoke control systems are both important for life safety and for property protection objectives.

Picture: Image Of A Sprinkler In Action.