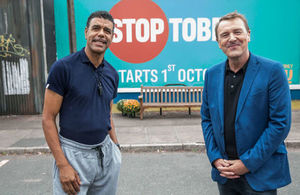 Smokers across the country are being urged to take part in Stoptober (the mass quitting challenge from Public Health England (PHE) starting on 1 October) and join nearly 15 million people who have already quit.

This increase in successful stop smoking attempts reflects the high number of people using quitting aids. In 2015, just over a million people (1,027,000) used an e-cigarette in a quit attempt while around 700,000 used a licensed nicotine replacement product such as patches or gum. In addition, over 350,000 people used their local stop smoking service in 2015 to 2016.

Alongside this, according to the latest data from Nielsen, the number of cigarettes sold in England and Wales has dropped by 20% in the last 2 years.

Dr Gina Radford, Deputy Chief Medical Officer, said: While we know that quitting smoking is not easy, this Stoptober is a perfect time to try again. The best thing a smoker can do for their health is to stop smoking. There is more help and support available now than ever before. The introduction of standardised packs removes the glamorous branding and brings health warnings to the fore and e-cigarettes, which many smokers find helpful for quitting, are now regulated to assure their safety and quality.

We also have a range of free support that can go direct to your phone, laptop or tablet via the Stoptober app, a daily email service or Facebook Messenger bot. The new Stoptober website also has advice and information on stop smoking services and quitting aids. Stoptober has helped lots of smokers quit for 28 days and beyond. So if you smoke, why not make this Stoptober the time you quit - for good.

Professor Kevin Fenton, National Director of Health and Wellbeing for PHE said: While it is amazing that there are over twice as many ex-smokers as current smokers in England there are still over 7 million people regularly lighting up.

Alongside unhealthy diet, smoking is the biggest cause of preventable early death in England, accounting for over 78,000 deaths a year. Quitters will soon see they have reduced blood pressure, easier breathing and better circulation. Stopping smoking is the best thing a smoker can do to improve their health.

Ex-England cricketer and Question of Sport captain, Phil Tufnell, said: "I’m really pleased to be supporting Stoptober this year. I have smoked pretty steadily since I was a teenager, even through my cricket career. I have tried to give up before and know how tough it is, but I am going to try and quit again from 1 October.

"Even if you have tried quitting before like me and failed, just give it another go and keep trying. The more you try to quit the more likely you are to get there. Stoptober is here to help, so let’s try and get through to 28 days without a fag by taking it one day at a time.

Dr Mike Knapton, Associate Medical Director at the British Heart Foundation, said: "Quitting smoking is the single best thing you can do for your heart health. Coronary Heart Disease is the UK’s single biggest killer and by giving up smoking you’ll be dramatically reducing your chances of having a potentially deadly heart attack or stroke.

"Stoptober is the perfect opportunity for people to take action to protect their health and join thousands of others who are also making a quit attempt this month."

Stoptober is back for a fifth year, having driven almost a million quit attempts to date. It starts on the 1 October and is based on research that by the time you have quit for 28 days you are 5 times more likely to stop for good.

Picture: Chris Kamara and Smoking Phil Tufnell have lent their weight to the Stoptober campaign

We have news of three London fires - one in a West End office block was spotted by security staff who evacuated 20 people but suffered smoke inhalation themselves. We...

One Cigarette A Day Won't Keep Doctor Away

Only total cessation of smoking will protect people and populations from tobacco’s toxic legacy says the BMJ, with just on cigarette a day seriously elevating...

Although Welsh hospitals have employed a no smoking ban both inside and outside their hospitals, the attempt to impose fines is something that is new. The no smoking...

Encouraging Staff Off the Evil Weed

During October, the nation’s eight million smokers will again be encouraged to take part in the mass participation quit attempt – Stoptober. It is commonly...