Sunday Walk Led to Sudden Death - What are the Autumn Risks? 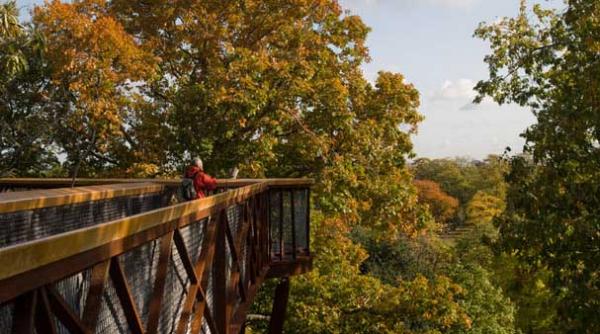 Although occurring over a year ago, an inquest this week heard how a single tree Lebanese cedar branch caused the death of a 32 year old woman from New Zealand in Kew Gardens, London, one Sunday afternoon last autumn.

One witness had reported that the fatal incident occurred near the Brentford Gate entrance and hearing a succession of large cracking sounds “like shotgun fire in very quick succession”. The woman, Erena Wilson, was found under the heavy branch but despite the efforts of paramedics, she was declared dead at the scene. Kew Gardens was shut the following day, although this was due to ‘severe weather warnings’.

A visit to the Kew Gardens’ website by ThisWeekinFM shows that there was no direct reference in the News section to the inquest and the general health and safety information related more to school visits to the 300 acre site.

The fatality highlights the question of how much a site like Kew Gardens can be entirely risk free, especially when visitors are encouraged to explore. Among the activities on offer, for example, are two that are described as:

‘Glasshouse galleries – climb up high inside the Palm House or the Temperate House to tower above the palms and plants and experience the huge scale of these historic glasshouses.’

‘Arboretum – run off some energy in amongst the trees of Kew’s arboretum; children in particular will enjoy the area around the Lake and the Sackler Crossing, where they can see duck, geese and occasional peacocks or golden pheasant.’

However, another aspect is whether areas like the one in Kew Gardens, are properly assessed for its potential danger. Branch dropping happens this time of year but addressing West London Coroner’s Court, counsel for the family, John McLinden QC, stated Kew Gardens had previously taken preventative measures to the public from falling branches that included issuing warnings and cordoning off areas but “these steps seem to have fallen away for reasons the family do not know”. He went on to say that the inquest needed to consider "whether summer branch drop caused the branch to fall, whether the tree had been pruned and whether there was a policy in place at Kew at the time to deal with that".

According to the Health & Safety Executive, in its guidance on the risk of falling trees or branches – specifically Section 3 Health and Safety at Work etc Act 1974 (HSW Act) – ‘Employers and persons carrying out undertakings or in control of premises all have duties under the HSW Act. In particular, there is the duty to do all that is reasonably practicable to ensure that people are not exposed to risk to their health and safety.

‘Doing all that is reasonably practicable does not mean that all trees have to be individually examined on a regular basis. A decision has to be taken on what is reasonable in the circumstances and this will include consideration of the risks to which people may be exposed.’

The HSE points out that, on average, five to six people die every year in the UK from falling branches or trees. However, it recognises that what may appear to be a low risk statistic, is not for those who die, are injured, or are related to those who suffer from these incidents.

The HSE also states: ‘Around half of all fatalities due to falling trees or branches occur in public spaces, such as a park or beside roads, so Section 3 HSW Act may be applicable. Whilst HSE may regard the average risk as extremely low, the law requires that where reasonably practicable [our italics] measures are available, in individual cases, they should be taken. Whilst the risk of such incidents puts them outside HSE’s and local authorities (LAs) main proactive priorities, inspectors may be called upon to investigate serious incidents, including fatalities.’

No one from Kew Gardens’ press office was available for comment when we contacted them.