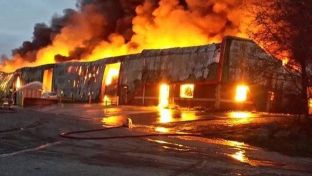 Two teenagers have been sentenced to three years detention for causing the death of a 35-year-old homeless Polish man when they set the vacant building he was sleeping in alight.

The tragic incident occurred on 10 June 2013 in a derelict building which had been the former home of the Sea Cadets in Davenant Road, Croydon. Firefighters were called in the mid-afternoon where they eventually found the body of Mr Sylwester Mendzelewski in the basement, who had died of smoke inhalation.

Police charged a 14-year-old boy and 16-year-old girl with manslaughter and arson on 10 September 2013. The trial took place on 27 June 2014 at Croydon Crown Court and the two – who cannot be named for legal reasons – were found guilty of setting fire to paper and a sleeping bag inside the building, even though the place was known to be used by homeless people, including Mr Mendzelewski. The two youths were sentenced to three months detention on Tuesday, 19 August 2014.

In a joint statement, Detective Sergeant Adam Manley, of the Homicide and Major Crime Command (HMCC), said: "This is an extremely sad case for all those involved, but more so for the family and friends of Mr Mendzelewski who have lost a loved one.

"Mr Mendzelewski, who was homeless, had been rough sleeping in the basement of the building but was trapped when the fire took hold. He stood very little chance of surviving the blaze. I believe he took refuge at the rear of the property in the hope of escaping the fire and intense smoke.

“These two young people were old enough to understand the consequences associated with starting a fire of this nature, but it’s only now that this has become a reality to them. Both have shown immense remorse but still have to live with the knowledge of what they did and the devastating impact on the lives of others.”

Picture: The devastating fire at the former home of the Sea Cadets in Davenant Road, Croydon where the body of Sylwester Mendzelewski was discovered

Police are appealing for witnesses to a fire in the city centre which left two men dead. Shortly after 2:15am on Friday November 25, police were called to reports of a...