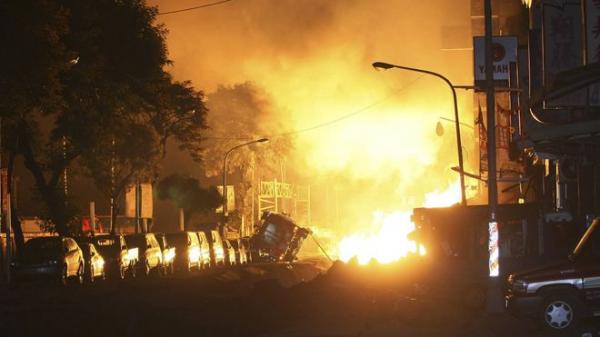 As reported by the World's media a series of explosions in Kaohsiung, Taiwan has seen streets destroyed and citizens killed and injured.

Some have suggested a leaking gas main but a TWinFM contact is sure that it is pipes installed to feed the burgeoning petrochemical industry in city that are to blame. She told us, Kaohsiung has very quickly been established to be the petrochemical centre for the country. Those alarmed by the smell of 'gas' have said it smelt of propane (a gasoline derivative) rather than household gas.

Initial suggestions are that propane has leaked from pipes running alongside or through the drainage system and this has provided a route, pressure and escape mechanism - manholes.

Many of the dead - 27 is the latest count - had come from their homes to investigate the smell and were caught in the explosions. Four firefighters who were investigating are among the dead. Nearly 300 residents have been injured.

The blasts occurred all over the large Cianjhen district of the city - roads have been split in two, cars truned up-side-down and buildings severely damaged.

Although domestic gas supplies have been turned off, there is no news on other services.

Economic Affairs Minister Chang Chia-chu is reported to have said: "We suspect the leaked gas could be propylene." However, ThisWeekinFM understands that this is a natural glycol and although associated with the plastics industry (which Taiwan is well known for) it is not associated with the petrochem industry.