Terror Suspects - Three In, Two Out 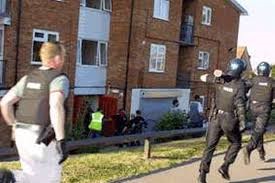 Counter terrorism officers arrested a further three men on 13 October. All three - aged 24, 21 and 25 were arrested on suspicion of being concerned in the commission, preparation or instigation of acts of terrorism.  All three were arrested in central London and are at present in custody.
On Wednesday 8 October a warrant of further detention was granted by a magistrates' court for the five men arrested on Tuesday 7 October but two of those have now been released.A search has taken place at a business address in west London and there are ongoing searches at a further four residential addresses in north west London.

The Metropolitan Police have confirmed that further to the arrest of four men on counter terrorism charges, a fifth man was apprehended later in the day - the information  was not released at the time for 'operational reasons'.

All five will remain in custody at Central London police stations until at least 14 October.

Police Commissioner Sir Bernard Hogan-Howe has confirmed the arrests are part of a 'very serious case' and that there had been a 'series' of arrests in recent weeks. He referred to a drumbeat around 'Islamic' terrosism that had become more intense. "We're having to be more interventionist and a lot of it is linked back to Syria and Iraq," he said.

According to The Times, the four (five) men arrested on Tuesday 7 by officers from the Metropolitan Police's Counter Terrorism Command were hell bent on acquiring weapons to attack individuals in copycat beheadings.

One of those arrested, medical student Tarik Hassane, had been in Syria and flew back to the UK over the weekend. The Times reports that he had been tracked by MI5 for a year. He is also reported to have Tweeted prior to his arrest 'Oi lads...I smell war' and although friends have said this was banter, it has struck fear that the philosophies of IS (or ISIL) have the poisonous ability to mutate with a gang mentality to encourage random 'hit and run' terror murders.

The police and security forces are said to be monitoring a number of situations but know that the rise of small 'independent' gangs threatens to overwhelm their resources.

Officers from the Metropolitan Police's Counter Terrorism Command (SO15) have arrested four men today, Tuesday, 7 October on suspicion of being concerned in the Commission, Preparation or Instigation of acts of Terrorism (contrary to section 40(1)(b) of the Terrorism Act 2000).

Two of the men are aged 21 while the other two are just 20. They were arrested after warrants were executed at addresses across London. They have all been taken to police stations in central London and remain in custody. One of the men aged 21 was tasered during his arrest. He was not injured and did not require medical treatment.

SO15 officers were assisted in the execution of warrants at one of the addresses by officers from the Specialist Firearms Command (SCO19). No shots were fired.

A number of residential addresses and vehicles are being searched by specialist officers in west and central London as part of the investigation. The searches are ongoing.

"These arrests and searches are part of an ongoing investigation into Islamist related terrorism," said a Met Police spokesperson.

Picture: Please note this picture is for illustration purposes only and was not taken at any of the addresses visited today and do not show the specialist terrorism or firearms teams involved