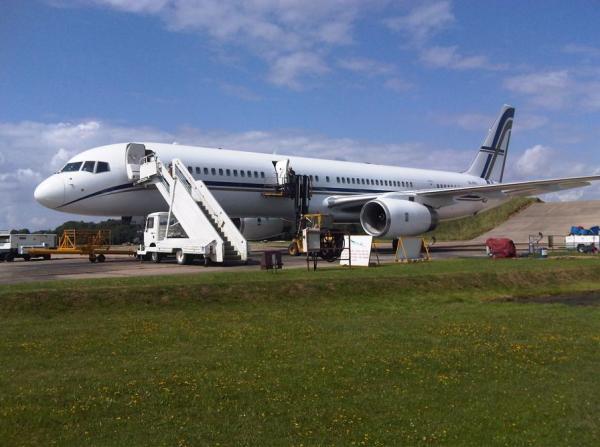 An aircraft maintenance company has been sentenced for safety failures after three workers were injured in separate falls at its airfield in Lasham – two in the same month. The first incident at ATC (Lasham), which has an international client base, saw an employee fall 5m from an aircraft door to the runway tarmac while repairing a faulty door. His injuries were at first thought to be life threatening.

Less than three weeks later, a contractor, broke a knee after falling 3m when a weld gave way on a scissor lift. Finally, another employee fell from an aircraft stand that had no guardrail between the aircraft and the stand steps, fracturing a thumb in three places.

The incidents, on 9 and 27 July, and 30 November 2011 respectively, were investigated by the Health and Safety Executive (HSE), which prosecuted ATC (Lasham) for three safety breaches at Salisbury Crown Court.

The court was told the first worker, then 60, from Alton in Hampshire, had been helping to fix an aircraft door fault that had been detected during crew safety checks. During the repair, the door was opened by the worker and it flew out under pressure. As he was holding on to the door, he was pulled out of the plane and plunged 5m to the ground as there were no safeguards in place to prevent him falling. He suffered a broken right thigh and ankle and needed rods and pins inserting to help him recover. He has since been able to return to work.

Later the same month, a contractor, 48, from Wootton Bassett, Swindon, fell as he attempted to climb down from inside a Boeing 757 wing fuel tank. He was standing on a scissor lift when a weld in the lift gave way, sending him falling to the ground below.

The final of the injured three, an employee then aged 67, from Ascot, Berkshire, sustained a multiple fracture to his thumb as he fell from an unprotected part of an aircraft platform.

The court heard HSE identified that, in all three incidents, ATC had failed to provide safe plant and system of work for the three men. There was a lack of safe procedures for working at height, provision of unsuitable and unmaintained equipment, and general poor management. After the incidents, HSE had served a number of prohibition notices halting certain areas of work and improvement notices requiring better working practices.

“Three workers have suffered painful injuries owing to inadequate safe systems of work employed by ATC (Lasham) which is particularly disappointing given it is a major company working in a particularly safety-critical sector,” explained Kelly Nichols, HSE Inspector, after the hearing. “The company’s management of health and safety was extremely poor in many areas but particularly in their approach to working at height.”

HSE pointed out that the three falls had occurred in a relatively short period and these could have resulted in even more serious injuries. “Working at height needs careful planning and organisation, and part of that is selecting and using the right type of equipment, which is properly maintained and safe,” concluded Kelly Nichols.

Pictured: The plane and the door above the forklift where the first fall took place

Essex County Council has been fined after a novice climber plunged 7.5.m from an indoor rock face at a climbing centre in Harlow. The 15 year-old girl, from Ware was...